Frasier On The Backlot 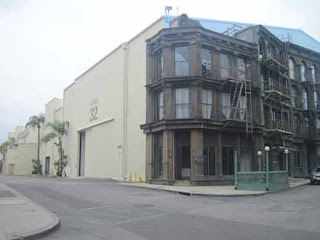 After a successful run on the sitcom Cheers, the character of Frasier Crane was given his own show.  Frasier aired for 11 seasons as did Cheers before it.  We were fans of both shows. 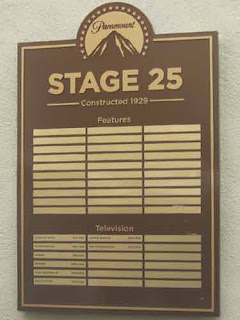 Kelsey Grammer played the role of Frasier and didn't have far to go between jobs.  Both shows were filmed at Paramount Studios and both shows were filmed on Stage 25.  We took a Paramount Studio tour when we were in Los Angeles.  We were able to see the exterior of this famous sound stage as well as visit a section of the backlot where one episode from the first season of Frasier was filmed. 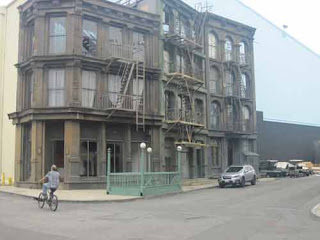 The Paramount backlot has a section named SOHO after the New York City area.  In episode six of season one, Frasier purchases a piece from an art gallery.  He is embarrased when the artist comes to his party and declares the work a fraud.  Frasier is angry and further frustrated when the art gallery dealer insists all sales are final.  He stands on the street ready to throw a brick through the gallery window.  Frasier would be standing between the bike rider and the green subway entrance in the photo above.  The subway entrance was removed in order to film the scene. 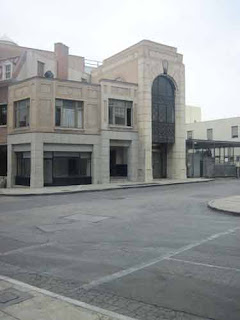 A couple walks by and Frasier hides his brick behind his back.  You can see the building above behind them as they cross the street.  Frasier turns to throw his brick but this time his brother Niles pulls up in his car.  Niles tries to calm Frasier by telling him of a time Frasier stopped him from exacting revenge.  Frasier gives Niles the brick and reminds him of how stromg he was despite the nicknames, such as Peachfuzz.  Niles hurls the brick through the window, tosses some money into the gallery and leaves.

"We may be barbarians, but we pay for our pillaging!"