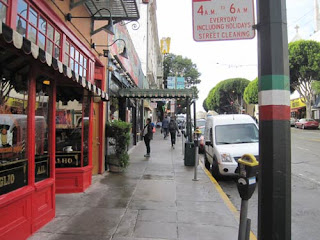 One of us is very fond of garlic.  So when we discovered a restaurant totally devoted to garlic based recipes we just had to pay it a visit.  The Stinking Rose in San Francisco stands out as you drive down Columbus Avenue.  It has been turning heads with its unusual name and filling noses with its overpowering smell for over 25 years. 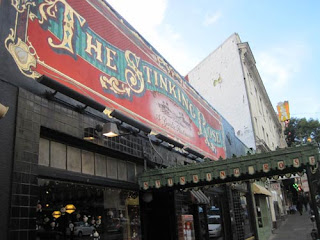 The idea for the restaurant came after a visit to the Gilroy Garlic Festival.  The town of Gilroy is about an hour and a half south of San Francisco and is known for its garlic.  We stopped in Gilroy to gas up the car during our California driving trip.  As soon as we exited the vehicle we could smell the garlic, even over the fumes from the gas station.  We also paid a visit to Garlic World which is a grocery / souvenir shop selling local products. 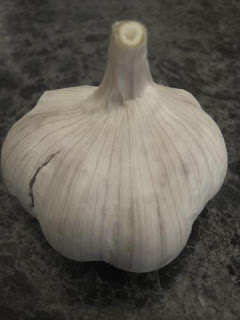 Back at The Stinking Rose we enjoyed an appetizer of garlic spinach fondue and followed it up with a couple of garlic based entrees.  Everything was delicious and after our meal we advertised for the restaurant with our breath. 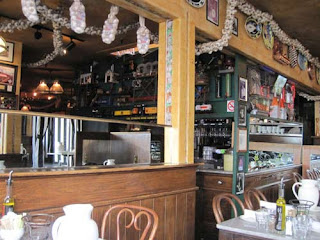 The restaurant also boasts one of the world's longest garlic braids.  It has close to 2,600 blubs on it and wraps all around the interior of the restaurant.  If you are looking for a unique dining experience we highly recommend The Stinking Rose.  It was one of the culinary highlights of our California trip. 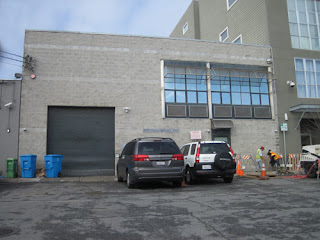 When we were in San Francisco we stopped by the offices of M5 Industries Inc.  This is the company owned by Jamie Hyneman.  Together with Adam Savage he hosts the MythBusters television show.  Adam & Jamie are usually assisted by Kari, Grant and Tori.  This trio is often referred to as the Build Team.  On the show they test rumours or myths and use science to determine if they are plausible or busted.  The show has always proved entertaining and all of the personalities on the show are likeable and legitimately seem to be interested in what they are doing.  Another great thing about the show is that they like to blow things up.  Blow things up good.  They then like to replay the explosion in super slow motion so you can really get a good look. 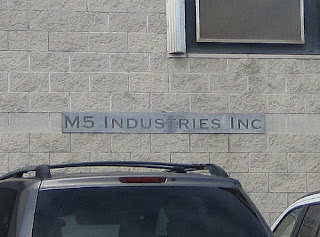 The offices are attached to the M5 workshop which is where a majority of the episodes are filmed.  When we arrived at the building some workers were outside repaving part of the front sidewalk.  Perhaps it was an experiment gone wrong, or maybe the destruction was intended.  It definitely reminded us of the Jimmy Hoffa episode where they buried two pigs in concrete very close to that spot.  It also reminded us of an episode where Jamie was buried alive while inside a coffin.  That myth was tested almost in exactly that spot.  In fact there have been numerous episodes where things have been dropped off of the roof or blown up in the garage doorway or tested in front of the wall with the M5 INDUSTRIES INC sign.
The back lot of the building has also seen a fair bit of use, especially in the earlier episodes.  They shot a frozen chicken through the windshield of a plane and Jamie created an army of marching feet in an attempt to shake a bridge apart.  As time went on the Mythbusters myths grew in size and they spent more time out on the bomb range blowing things up or at the Alameda Runway crashing cars.  The Build Team also used a nearby location called M7 to conduct experiments. 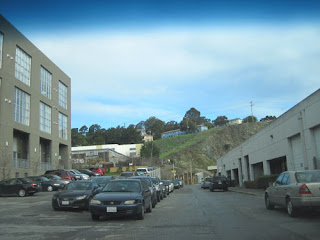 Mythbusters will be airing its final episode today (March 5, 2016) after about 13 seasons.  We are sad to see the show end, but the Mythbusters and the M5 building must be glad that they all made it in one piece after years of taking risks to entertain us.  Do not try what you saw on Mythbusters at home.  They are what you call experts. 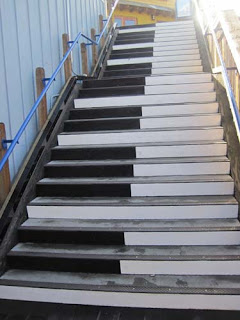 Pier 39 in San Francisco has seals and stores and carnival rides and more.  Part of the more is a set of stairs designed by Remo Saraceni.  Remo also created the floor piano used in the Tom Hank’s movie Big. (You can read more about the Big piano here.)  The stairs follow a similar concept where the keys are activated by your feet.  The stairs are painted like the keys of a piano and as you walk up the notes get higher.  As you head back down the notes get lower.  If you practice a little bit you might even be able to work out something that resembles a tune.  Just be aware that a floor piano is much safer than jumping up and down stairs trying to hit the correct notes.  One wrong move and you may end up sliding all the way down to a low A flat.  You may want to get a few friends together and each pick one or two notes to play.  Also be aware that other people are just trying to use the stairs to get where they are going and may walk noisily through your masterpiece.  These musical stairs are far more interesting than your average set of steps.  We enjoyed doing a little people watching to see people's expressions when they take that very first step.  It was also fun to see the people who pretended they were not enjoying themselves as they musically scaled the stairs.