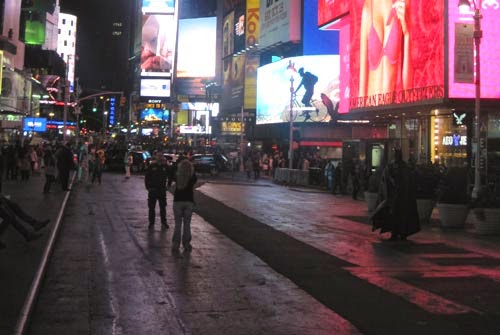 Times Square in Manhattan is known for having thousands of tourists swarming around 24 hours a day, and for having lights and advertising wherever you look.  It is also a place to find people dressed up as popular movie or TV characters.  You may even encounter people dressed as "What the hell is that supposed to be ?".  They can all be found in Times Square hoping to pose for photos and earn a buck or two.  This list includes our favourite characters.

1 ) Batman
Not dressed like Adam West Batman, (We would pay to have our photo with him) but more likely the Christian Bale Batman or Michael Keaton Batman.  Or is that Val Kilmer or George Clooney?
Anyway, it just depends on how long they have had the suit and when they decided to start wearing it in public.  If you are going to invest in a costume, Batman is a safe bet.  Although you will have a fair bit of competition.  We were also surprised not to see any Dynamic Duos.  Sorry Robin.
2)  Elmo
Everyone's favourite giggling Sesame Street monster can also be found in abundance. We once were on the New York subway when an Elmo got on at 49th street after a hard day's work.  He soon revealed himself to be one very sweaty man.
3) Minions
Minions from Despicable Me are taking over the streets.  With a Minion movie and Despicable Me 3 on the way, they are not going to disappear anytime soon.  You can spot their little yellow heads through the crowds.  When choosing a costume, minion is best left to the shorter people.  Nobody wants to take photos with a 6 foot 4 minion.  If you taller people insist on dressing as minions, may we suggest you dress as the purple guy with the crazy hair.
4) Toy Story
The popularity of Toy Story characters has yet to fade.  Maybe it has faded a bit, but Toy Story made the list mainly because Woody & Buzz never seem to be too far from each other.  This also makes them the only duo on our list.  Again, sorry Robin.
5) Hello Kitty
Hello Kitty has worked her way from the pencil cases of Japan and into the hearts of the world.  Now she is waiting to become part of your New York vacation memories. 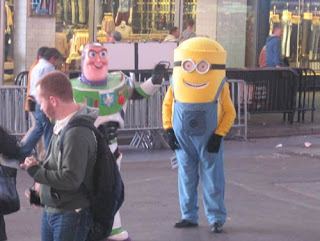