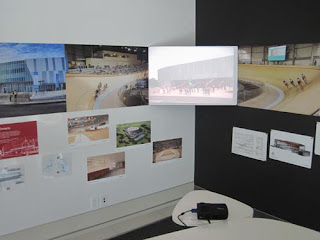 During Doors Open Toronto 2015 we visited the offices of architectural firm CannonDesign.  When we arrived we were escorted up to the 12th floor for a look around.  CannonDesign is responsible for designing three of the new venues created for when the Toronto area hosts the 2015 Pan Am Games. 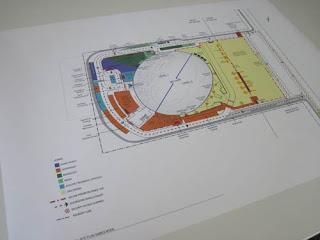 They designed the Milton Velodrome which will be used for cycling.  A velodrome is a large oval track which is on a steep angle.  The cyclists use the angle to manoeuvre in order to get the best position or gain speed on their opponents.  The bicycles they ride have only one gear and no brakes.  There are only two ways to stop.  You either coast around until you slow down, or you fall off. 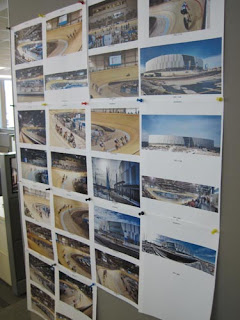 The Hamilton Soccer Stadium they designed will also be used during the games. 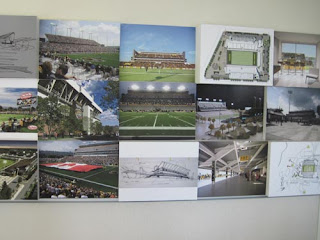 As will a new York University Athletics Stadium designed for hosting track and field events.  All of these venues were designed in hopes that they will serve the communities long after the games have ended. 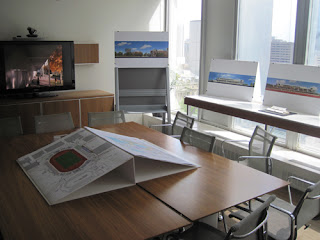 We noticed a few other things as we walked freely through their offices.  We noticed that their 12th floor vantage point gives them a great view of Roy Thomson Hall and the CN Tower to the south, and of the Canada Life building and Osgoode Hall to the north. 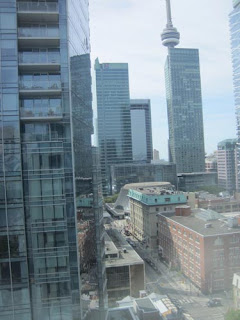 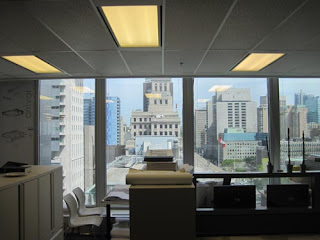 We also noticed that one employee is either a McDonald's Grimace fan or else someone in their family is a dead ringer. 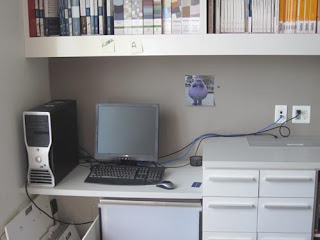 One final room was an area where the architects of tomorrow could work on their plans using paper and glue and popsicle sticks.  It was an interesting idea to show us the designs behind the buildings that are yet to be put into use.  So much of Doors Open is spent talking about the history of the buildings that have survived through time.   Lets hope these sporting arenas are put to good use, starting with the upcoming games. 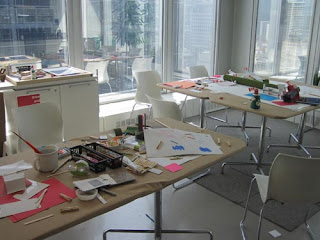 CannonDesign
Post # 61
Posted by On Vacation at 12:30:00 am
Email ThisBlogThis!Share to TwitterShare to FacebookShare to Pinterest
Labels: Canada, Ontario, Pan Am Games, Toronto, Works of Art
Location: 200 University Avenue, Toronto, ON M5H, Canada