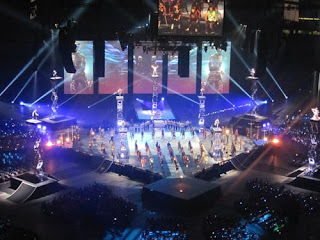 We arrived at Union Station courtesy of a free ride on the TTC.  Anyone with a ticket to any Pan Am event gets to ride the subways, buses and streetcars in Toronto for no additional charge on the day of their event.  As we came up from the subway we could hear music and we were greeted by two dancers performing for the crowds as they headed towards the Opening Ceremonies. 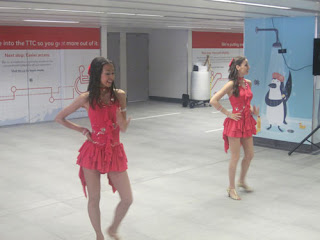 The Pan Am Opening Ceremonies took place on the evening of July 10th, 2015.  They were held in the Pan Am Dome (PAD) which outside of the games is normally called the Rogers Centre.  We still prefer its original name of Sky Dome.  As we headed towards the dome we walked right past the Pan Am Games Cauldron which would be set ablaze later that same evening.  The cauldron is made of multi-coloured pieces of steel with symbols of the different sports cut into each piece. 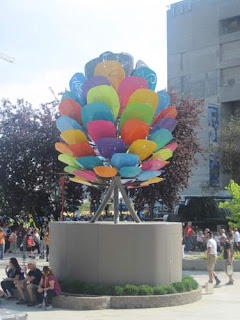 We arrived early enough to be entertained by some CBC on-air personalities making small talk and we had a chance to participate in the PACHI shuffle.  Let's fast forward about an hour to when the real show began. 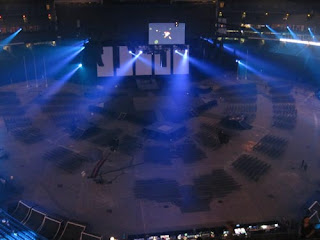 The world famous Cirque du Soleil created a special performance for the Opening Ceremonies.  It started with dancers dressed in traditional outfits from around the world and the electronic First Nation music of DJ Shub.  DJ Shub is formerly of Canadian group A Tribe Called Red who will perform in Toronto as part of Panamania. 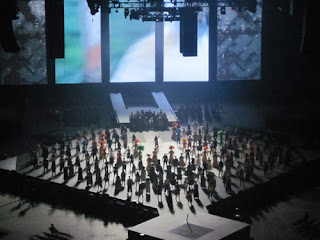 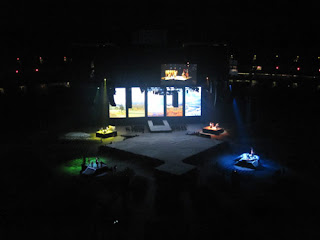 The show then switched gears as we were treated to a video performance of the torch relay as it headed towards Toronto.  The gold medal winning 1996 Canadian men's relay team carried the torch past Toronto landmarks and then ended up on the Edgewalk at the top of the CN Tower.  Sprinter Donovan Bailey appears to base jump from the top of the tower and then lands onto the roof of the Rogers Centre.  A moment later he descends down onto the stage carrying the Pan Am Torch. 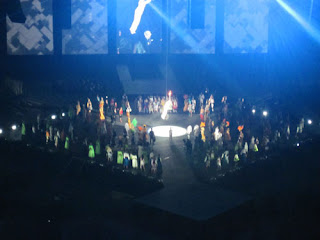 The torch is placed at the front of the stage so that it can watch over the remainder of the ceremony.  Now it was time for all of the athletes to enter.  In total there will be over 7000 athletes from 41 delegations taking part in either the Pan Am or Parapan Am Games.  We say delegations instead of countries because the Pan Am Games allows teams to compete from territories like the Cayman Islands.  Some of the teams consisted of just a handful of athletes, such as Grenada pictured below. 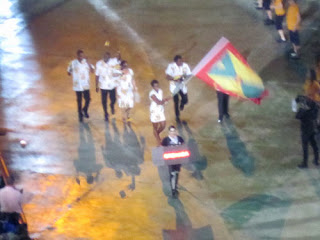 Some teams were much larger, such as the host team of Canada which boasted 700 athletes.  All of the teams entered in a burst of smoke and lights as excited volunteers danced and clapped and welcomed them to the games. 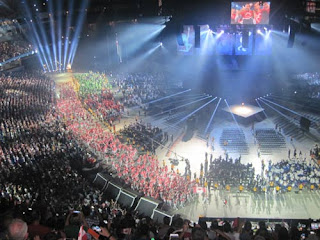 Once all of the athletes were seated, it was time for Cirque du Soleil to take back the stage.  Once again the music began as performers rose up on elevated platforms.  Things started slowly as the athletes seats glowed through the darkness. 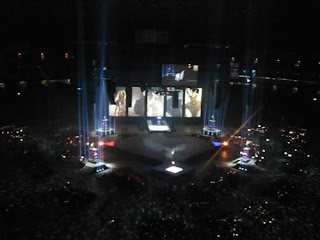 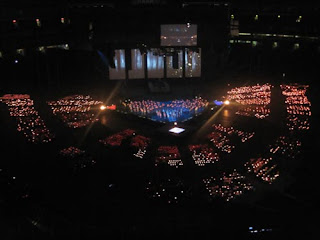 Then things picked up as a fire roared through the center of the stage and the Cirque performers danced and flipped through the flames.  The show continued through various changes.  There was always so much happening that we did not know where to look.  Everywhere you did look there was someone swinging or spinning and contorting their body through this world of music and lights. 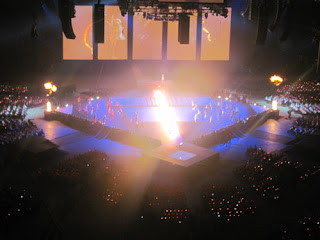 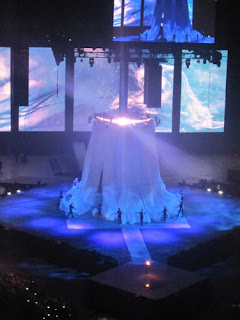 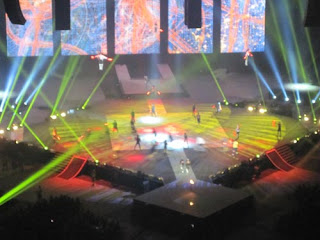 Soon it was time for the official Olympic and Pan Am Flags to arrive. As the announcer called out the names of the flag bearers, each one was a Canadian superstar. 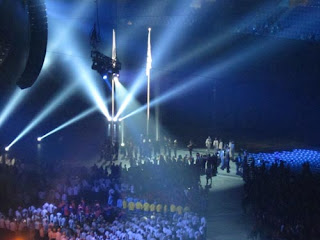 The flags were raised and the athlete and judge oaths were taken.  Then the speeches by Saad Rafi, Chief Executive Officer Toronto 2015 Pan Am Organizing Committee and others welcomed us all to the games. 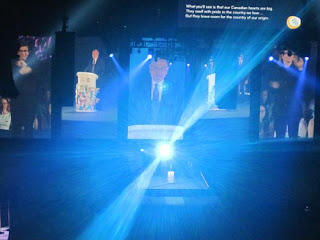 After the last thank you and muchas gracias, the torch was taken from its resting place and the Canadian women's relay team from 1984 ran with the flame.  They managed to find each other in the dark amongst the athletes and passed the flame along.  Finally, Marita Payne Wiggins passed the flame to her son Andrew Wiggins who is a rising NBA star.  Andrew ran with his torch half way up the stairs into the stands where he passed the flame to certified Canadian NBA star, Steve Nash.  Steve ran up the stairs, exited the Rogers Centre and set the Pan Am Cauldron ablaze where it will burn for the duration of the games.  Officially the games had begun. 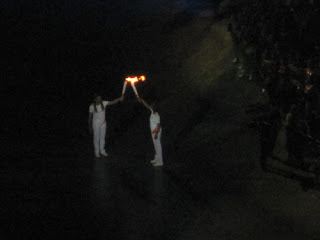 To cap everything off, there was a fireworks display that also set the CN Tower ablaze.  Unfortunately, as we were inside the Rogers Centre with the roof closed we had to marvel at it on the giant video screens.  We had hoped the roof would be open, but with the Rogers Centre being nestled right against the tower we may have only seen a cloud of smoke as the ashes of the expended fireworks rained down upon us.  We are hoping that this display is repeated at the closing ceremonies July 26th, 2015.  So far it has been a great games for Canada and we look forward to the Parapan Am portion to begin in August. 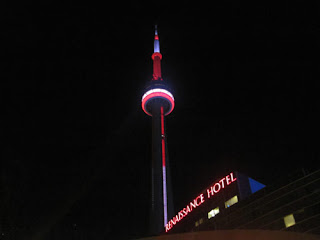