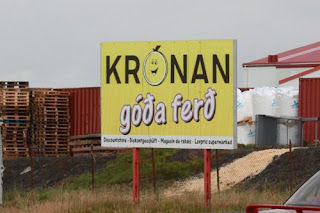 As we explored southern Iceland, we found that we encountered many Icelandic signs which peaked our curiosity.  Below is a list of our favourites and what we have learned about them.  Some of these may forever remain a mystery. 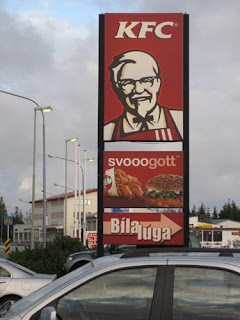 1) KFC
We did not notice very many American restaurants in Iceland.  We did eat a Kevin Bacon burger at a restaurant called American Style, but we had never heard of that restaurant before.  What we did notice was this Kentucky Fried Chicken restaurant with the Icelandic version of their slogan "so good".  In this case it appears as "svooogott" and it is trademarked.  By the way, Bila Luga means that they have a Drive-Thru. 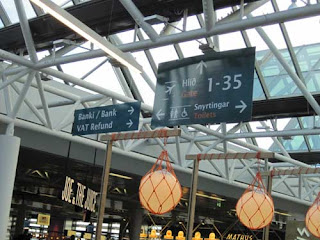 2) Toilets
There are usually a few things that are important to know when visiting a foreign country.  For example, Iceland's emergency phone number is 112.  Another important thing is where to find the toilets.  We call this the washroom or restroom, but in Iceland it is the snyrtingar.  Thankfully in most places, such as Keflavik International Airport, they had not only the male / female symbols but wrote the word toilets on their signs as well.  We wonder how many calls 112 gets asking "Help! I really need to know how to spell toilet in Icelandic"? 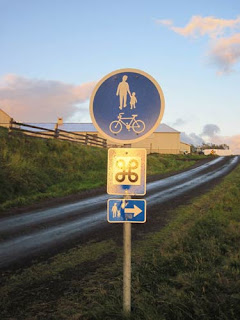 3) Culture or Attraction Symbol
You may see some signs which have a sort of flower pattern or swirl on them.  These point to attractions or places of cultural significance.  It could be a waterfall or a historic village or a cave believed to be full of trolls.  If you have the time, we suggest you pull over or head up the road and discover which it might be.  In the picture above, people and bikes can head down the road, people can use the little pathway on the right and an earlier sign states no cars past this point.  We still drove our car down the road as we thought this might be our hotel, which it was not.

4) Goda Ferd
Goda Ferd means Good Travels or Bon Voyage.  As we drove along the Highway 1 Ring Road we saw this on several occasions.   The other side of the sign would say Velkomin which means welcome.  So as you entered a town you were welcomed and on the way out you were wished a safe journey.  In the photo at the top of this post, Kronan is just the name of a store which is similar to Krona which is the Icelandic currency. 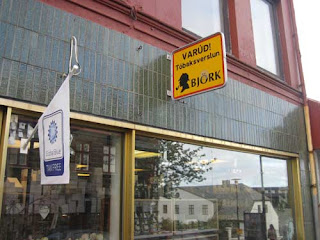 5) Sherlock Bjork
When we first saw this sign we were wondering what Sherlock Homes and the famous Icelandic singer had to do with it.  We have determined that the sign says roughly "Caution! Tobacconist" and that bjork means birch.  This sort of explains the image of Sherlock Holmes but we still have questions.  We looked in the window and it appeared to be a souvenir shop.  We never ventured inside so the questions remain unanswered. 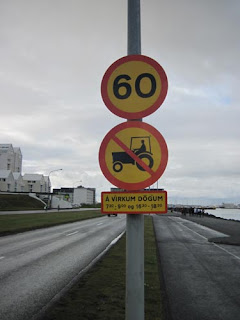 6) No Tractors
Weekdays between 7:30 until 9:00 AM and 4:30 until 6:30 PM you cannot drive your tractor into Reykjavik  We only encountered a tractor on the road once during our visit and it was well outside of the city.  We found it interesting that these signs were all over Reykjavik yet the amount of tractor traffic we saw was close to none.  Perhaps they were still standing from many years ago. 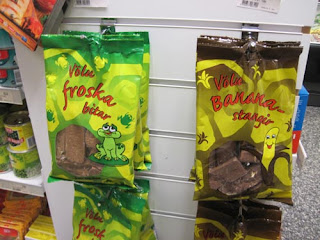 7) Frogs & Bananas
Both packages looked chocolatey good.  One had a cartoon frog on it and the other had a cartoon banana.  We wondered if the frog was just a cute cartoon character added to the packaging as the chocolate was all in rectangle shapes.  We almost bought a pack out of curiosity but decided against it.    According to Google Translate we later learned that the package on the left reads "Volumetric Banana Rod" and the other reads "Volumetric Frog Bits". 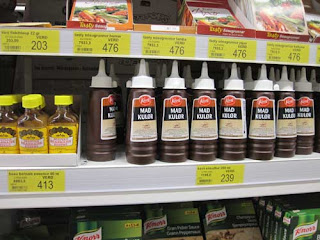 8) Mad Kulor
We would expect mad kulor to be used in a sentence such as the following.  "When we saw the northern lights, the sky was lit up with mad colour".  Mad kulor actually means food colouring and is a kind of brown sauce or gravy.  It may also be a carmelized sugar.  We also read somewhere that you only need to add a few drops to a meal so we are unsure of its intensity.  Perhaps it can help you consume your froska bitar. 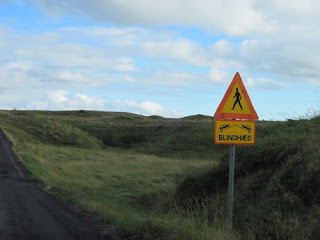 9) Blindhaed
This means that there is a steep hill ahead where you cannot see oncoming traffic.  Since the road is gravel and barely wide enough for two cars be sure to take it slow and hope that others coming over the hill do the same or you may end up like this highway reminder (below). 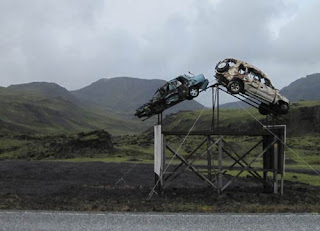 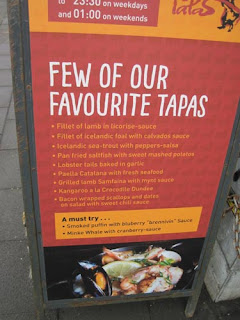 10) Tapas Menu
This menu caught our eye but did nothing for our stomachs.  While you may not be interested in puffins, horses or minke whales as part of your meal, at least they are local..  We wondered why they offered kangaroo and what exactly does "a la Crocodile Dundee" mean. What is Paul Hogan up to these days anyways? 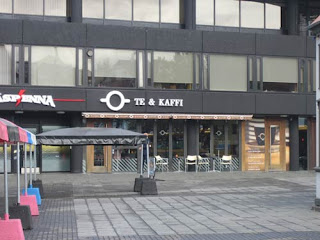 11) Te & Kaffi
This one we are sure that all of you in need of your caffeine fix can figure out. 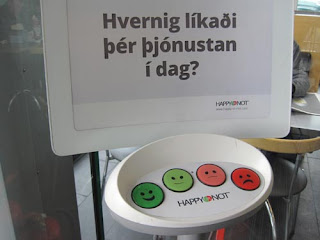 12) Happy or Not
The Happy or Not company is supposedly worldwide, but this is the first time that we had seen them.  You push one of the 4 buttons from smiley to frown in order to answer the question above. The results are then recorded for the company to get the anonymous data.  This sign was in a gas station and says roughly "How did you like the service today?"  The airport had lots of them asking things like how was your experience at passport control or baggage claim 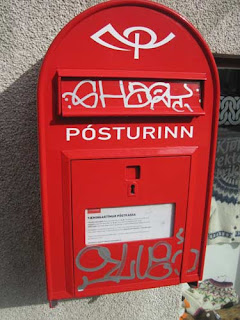 13) Posturinn
This is an Icelandic post box which is fairly obvious even without reading the writing.  If you are familiar with the British show Postman Pat it translates to Posturinn Pall in Iceland. 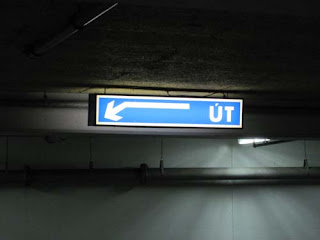 14) Ut
While attempting to exit the parking garage we noticed this sign.  No someone had not rubbed off the O in front.  When there is the accent above a U it is pronounced like two Os as in zoo.  This would read "oot", which is very close to the English "out".