I Promise It Will Always Be This Way 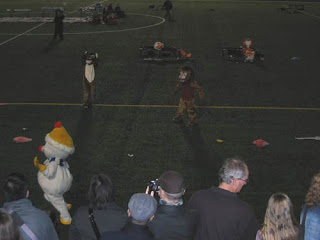 Nuit Blanche is an evening of art and performances which started in France but is now popular in cities around the world, particularly in Europe.  Toronto is one of six Canadian cities that have held Nuit Blanche or White Night.   We attended the event in 2008 with close to one million others.
One of our favourite performances was “I Promise It Will Always Be This Way”.  This piece consisted of a group of mascots rallying the crowds at Lamport Stadium.  Nuit Blanche runs from about 7 PM until 7AM the next morning.  As the evening wore on the mascots would get to test their endurance. 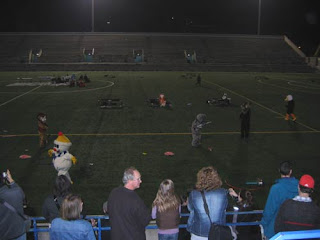 We heard the music pumping as we headed towards the stadium. We walked inside and came out in the bleachers.  Dancing with Myself by Billy Idol was cranking out from the sound system and a group of mascots were keeping the crowd going.  There was a snowman, a cat playing a guitar, a bald eagle and many more.  We were instantly caught up in the excitement.  It's funny how if a group of University students were trying to get the crowd going by jumping and dancing around you might get into it, but dress those same students up in animal costumes with over-sized heads and they can easily whip the crowd into a frenzy. 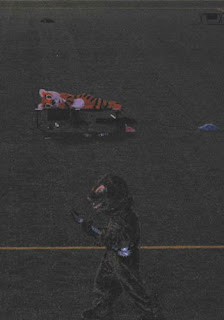 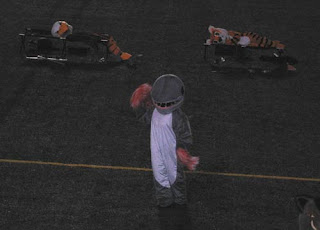 We arrived about midway through the evening and there were already a few mascots in dire need of a break  Just as we walked into the stadium, a bald eagle went and lay down on a bed and did not move for the rest of the time we were there.  Some of the performers may have been wondering why they got involved in all of this in the first place.  That was the point of the art experiment.  To see how things would evolve as the night stretched on.  To challenge both the performers and the audience.  We are not sure what we ended up taking away from it all, except that it was a memorable bit of fun. 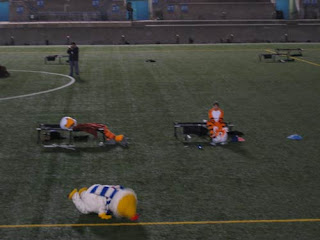 Nuit Blanche (I Promise It Will Always Be This Way)
Post # 73
Posted by On Vacation at 12:30:00 am
Email ThisBlogThis!Share to TwitterShare to FacebookShare to Pinterest
Labels: Canada, Nuit Blanche, Ontario, Performances, Toronto
Location: 1151 King St W, Toronto, ON M6K 1E9, Canada