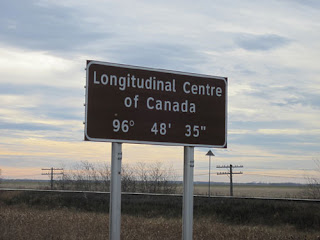 Somewhere between the eastern edge of Newfoundland and the western side of British Columbia is the longitudinal centre of Canada.  We had flown to Winnipeg, Manitoba and when we heard that the longitudinal centre of Canada was a short drive to the east, we set out for a drive.  We did this despite the fact that our actual destination was in Saskatchewan to the west.  The drive took us about 20 minutes from Winnipeg until we reached the signs.  The nice thing about the Trans Canada Highway is that it is not very busy and the Manitoba terrain allows so that you can see the signs coming from quite a distance away. 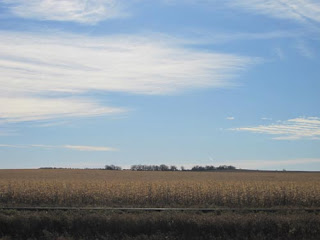 There are actually two brown signs on each side of the highway.  Two on the east side and two on the west side so no matter which way you are headed you will pass them.  We slowed down with our camera ready and fired a few shots out the window.  Since we were headed west we had to head down the highway a bit for the next chance to turn around.  As we passed the signs again we fired away.  The end result is that the picture at the top of this post is the best one of the bunch.
The reason that there are two signs is because Canada has two national languages, English & French.  That means there is one sign that reads Longitudinal Centre of Canada and another which says Centre Longitudinal du Canada.  We are not sure why they did not combine them into one sign with both languages as is usually the case.  Perhaps they could not agree on the actual spot.  Is it the first sign?  The second sign?  Or somewhere in between?  At any rate we drove past them all.
The signs mark the point 96 degrees, 48 minutes of arc and 35 seconds of arc.  Don't be confused thinking that the ' and " mean feet and inches.  There does seem to be some debate as to if this is the actual spot, but we will trust the highway signs as they have always helped us get where we were headed.  Also debated is the exact centre of Canada.  This would be where the longitudinal centre meets the latitudinal centre.  Since the majority of Canada is unpopulated, this is located somewhere up in the territory of Nunavut. It is well above any of the provinces and not anywhere you could drive to.  We would place it roughly in line with the country of Iceland.
Next time you are in Winnipeg, Manitoba or headed that way, maybe we will meet you in the middle.