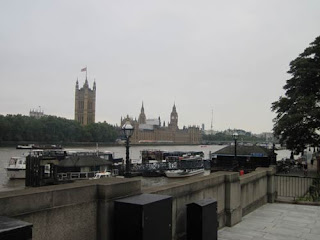 We had just finished walking along the Thames from the South Bank area.  We stopped at Lambeth Bridge and looked back.  Hey look !  Big Ben and Parliament!  Hardly surprising as we could see them any time we looked across the river during our walk.  Now driving in this area would be a different experience altogether.  The Griswolds had this experience in the movie European Vacation.  Chevy Chase (Clark Griswold) drove his family into a roundabout and was unable to get out again. 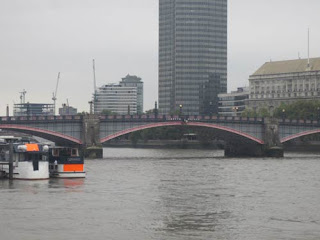 They drove over Lambeth Bridge and past the pointed columns called obelisks and entered into the roundabout. 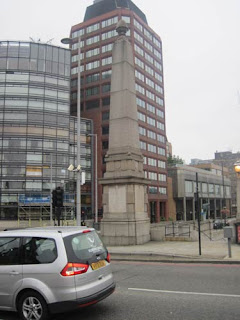 Roundabouts may have been made famous in England, but they are becoming more popular around the world.  Instead of using traffic lights, the traffic from all sides enters into a circle.  The traffic already in the circle has the right of way.  You go around the circle until the road you want presents itself and you turn out of the roundabout.  Fairly simple unless you find yourself stuck in the inner lane of a busy roundabout.  The Lambeth Road roundabout is actually the least round of all the roundabouts we encountered.  It has more of an amoeba shape.  It is on a weird slope and has trees growing on it and also part of it has a bike only lane chopped through it. 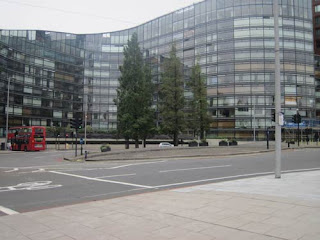 We know that this is the same roundabout from the movie since it is the only roundabout in all of London that provides such a perfect view of Big Ben and Parliament.  If you found yourself stuck in the inner lane you would get that view each time you passed the Lambeth Bridge, again and again.  So even though the buildings surrounding it have changed since the Griswolds wreaked havoc across Europe in the 80s, we knew this was the right place.  One building which has not changed and is briefly noticeable in the film is the entrance to Lambeth Palace (pictured below).  Lambeth Palace has been the London residence for Archbishops of Canterbury since the 13th century. 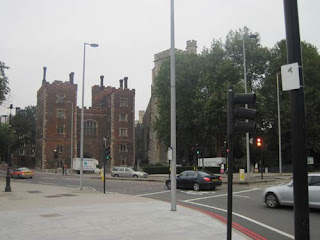 There is a much rounder roundabout on the opposite side of Lambeth Bridge.  Chevy Chase would have been forced to drive through this one in order to get to the other side of the bridge.  He must have had only a simple turn to make and not ended up stuck in the inner lane.  Otherwise they would have spent the night circling this roundabout instead. 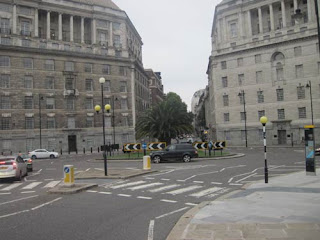 Just in case anyone was thinking what fun it would be to take their rental car for a few spins around Lambeth roundabout we offer a word of caution.   London has a large area where vehicles incur a congestion charge. (See the website at the top of this post)  This charge is about 11.50 pounds and can be many pounds more if not paid properly and you receive a fine.  We did rent a car in London and we flirted with the western border of the congestion charge area.  We did make many wrong turns as we attempted to return to our hotel and we probably broke a few other traffic rules.  We also managed to never enter into that area and eventually reached our destination.
Driving in London can be quite the experience on its own as most people need to adjust to driving on the opposite side of the road and sitting on the opposite side of the car.  If you are lucky you might even be able to take your attention off driving long enough to notice the view.
Kids?  We know, Big Ben. ... Parliament.