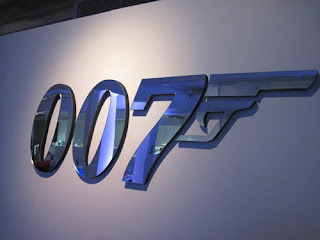 The London Film Museum at Covent Garden has been displaying the largest collection of James Bond movie vehicles ever assembled.  At the time of writing this post it has been extended until further notice.  It is also going to include vehicles from the latest Bond movie Spectre.  All of the items on display are originals used in filming.  When we were in London we could not pass up this opportunity as we have been enjoying the 007 movies our entire lives.   Below are some of the pictures we took during our visit.  We have presented them chronologically by film.  This is part two of two blog posts. ( Click here for Part One. ) This post covers movies where Timothy Dalton, Pierce Brosnan or Daniel Craig play the role of James Bond. 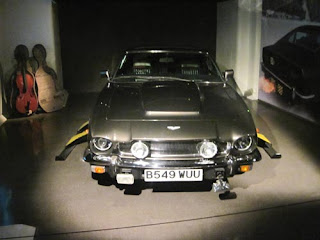 James Bond's Aston Martin has a laser that chops off the bottom of a police car.  It can also shoot missiles just in case you need to clear a tractor trailer from the road.  If needed it has skis and spiked tires for escape over ice.  It even has rocket power to enhance its jumping ability.  Ultimately, this vehicle ends up wrecked in a snowbank. 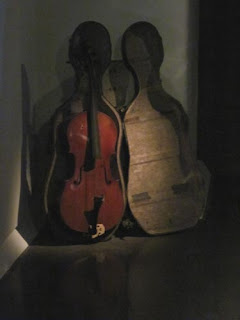 Next, Bond rides down a snowy hill with Kara Milvoy inside her cello case.  All the while protecting the precious instrument and making it past the border patrol and into Austria. 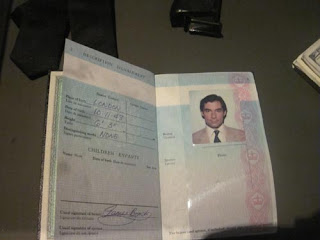 This is a passport prop from Timothy Dalton's two movie run as James Bond. 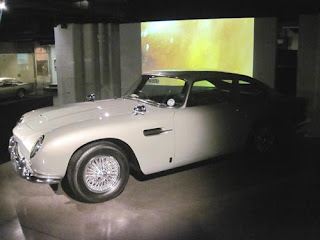 Bond races this car against Xenia Onatopp and her Ferrari.  They encounter a truck full of hay and knock over a group of cyclists before Bond's passenger, an MI6 evaluator, urges him to stop.  He does, but a bottle of Bollinger champagne gets other things started. 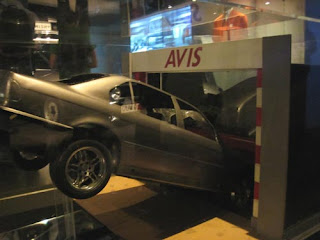 This is a model of Bond's BMW that Q qives him while disguised as an Avis agent.  Bond remote control races this car through a parking structure while in the back seat.  The car takes on a huge amount of gunfire and Bond defends himself with numerous gadgets. He jumps from the vehicle and it ends up crashing out of the top floor of the parking garage and goes head first into the Avis car rental across the street.  Congratulations on a safe journey. 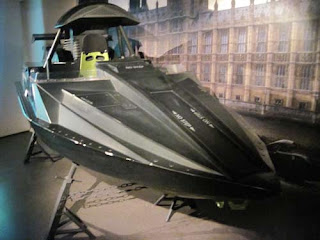 Bond shoots out of MI6 headquarters in this boat and pursues another boat up the Thames. 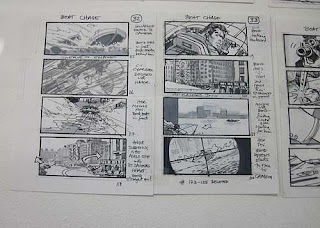 As seen in the storyboard above, they race around several wharfs and Bond does a barrel roll flip over the other boat.  Bond even takes the boat through the streets for a shortcut before landing back in the water near London's O2 arena  He abandons his boat when he leaps from it onto a rope hanging from an escaping hot air balloon. 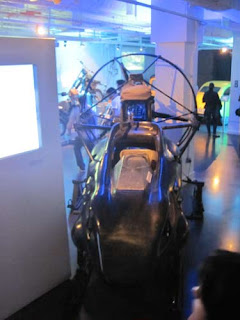 Bond skis down a hill while pursued by several of these Parahawks.  Some of them are blown up, but the final one is sent straight off a cliff. 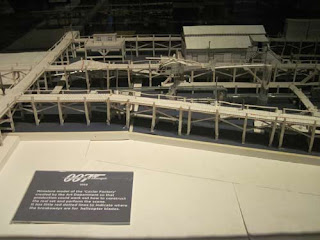 This is a model of Valentin Zukovsky's (Robbie Coltrane) caviar factory.  Bond ambushes Zukovsky at the factory, but then some helicopters with huge hanging saws swoop in and start to cut the place apart. 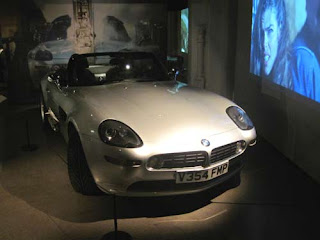 Bond gets into his BMW and shoots down one of the helicopters, but another copter comes from behind and saws his vehicle in half. 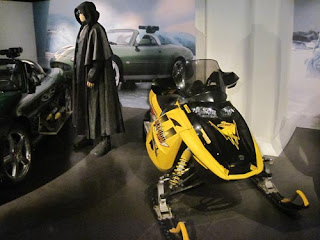 One of these yellow skidoos runs into Bond's invisible Aston Martin.  Bond takes off racing across the ice. 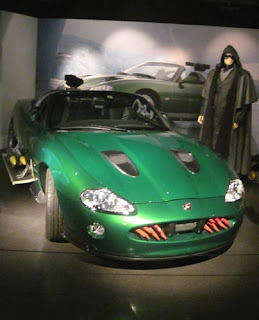 Under heavy gunfire from Zao in his green Jaguar, the camouflage on Bond's car fails.  Bond turns the car backwards to use his missiles against Zao's.  Bond gets flipped over, but uses his ejector seat to upright the car again. 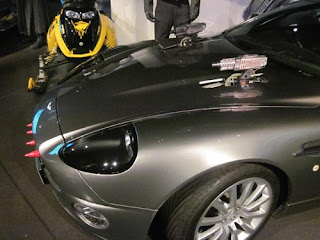 Bond takes out 2 more yellow skidoos as he enters the melting ice palace to save Jinx (Halle Berry).  His Aston Martin's camouflage is restored just in time to escape a ramming from Zao. 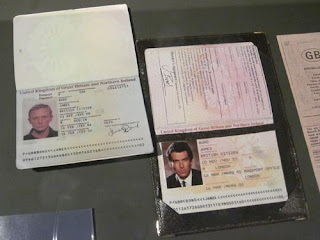 These are passport props from when Pierce Brosnan and Daniel Craig played James Bond. 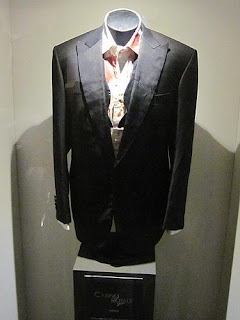 When his poker game takes a short break, Bond and Vesper Lynd head back to his room.  From the hallway, James overhears Le Chiffre being attacked.  The attackers identify Bond and a fight in the stairs ensues.  One attacker is quickly dropped down the stairwell while the other fights Bond with a knife.  Eventually, Bond chokes the last attacker to death.  During the scuffle Bond's tuxedo has been bloodied and ruined. 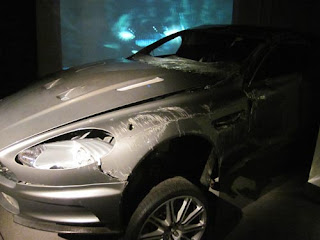 James goes looking for Vesper Lynd in his Aston Martin.  She has been left tied up in the road.  As Bond speeds along he only notices her there at the last moment and violently swerves the car.  This causes it to flip over several times.  Actually, this car flip is now in the Guinness Book of World Records for most cannon rolls in a car.  The record is seven. 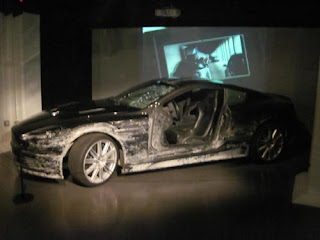 Bond is in the middle of a high speed chase.  His Aston Martin takes on a huge amount of gunfire and ends up getting its door ripped off by a truck.  Eventually, he escapes his pursuers and pulls into headquarters in Siena, Italy. 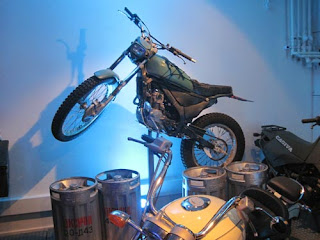 James Bond steals this bike and heads to the docks and jumps it onto a boat in order to catch up with Camille Montes. 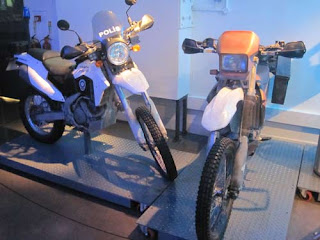 Bond chases after Patrice who has stolen a computer hard drive. They race on bikes through streets and shops and even along the rooftops. Patrice drops his bike and jumps off of a bridge and onto a train. Bond runs his bike into the edge of the bridge and leaps to the train below while his bike spins off out of control. 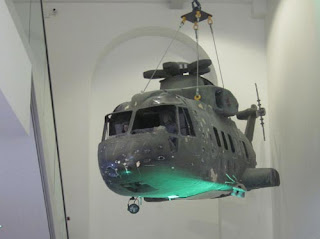 Sylva's (Javier Bardem) helicopter flies in to launch artillery fire on Bond's Skyfall hideout.  The helicopter lands and Bond fends off Sylva and his men.  The helicopter blows up Bond's car and then Bond intentionally blows up the house.  He escapes into a tunnel while the blast takes out the helicopter as it flies over the home.

This is part two of two blog posts.  Click here for Part One.