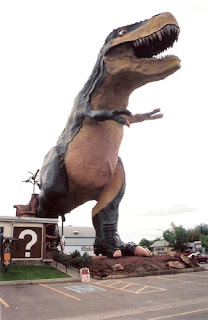 Drumheller, Alberta is known as a site where numerous dinosaur fossils have been found.  It is often referred to as the dinosaur capital of the world.  It is also home to the world's largest dinosaur.  Located right next to the tourist information booth stands a 25 meter tall Tyrannosaurus Rex.  This T-Rex is about 4 and a half times bigger than the ones that used to roam the earth.  For a small fee you can also climb up inside and look out through its mouth over the surrounding badlands.  We didn't take the climb, but we did get up close for a better look.
Being surrounded by all the dinosaur history of the area and looking up at this "tyrant lizard", we imagined what it would have been like to be alive millions of years ago.  There was a truck that pulled up in front of the dinosaur advertising "The Best Buffets in Drumheller".  Perhaps it was an attempt to appease the beast.  If the T-Rex did manage to take a step forward, our Ford Escape rental car would have been the next thing it encountered.  We decided it was time to get back on the road. 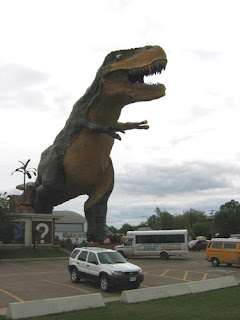