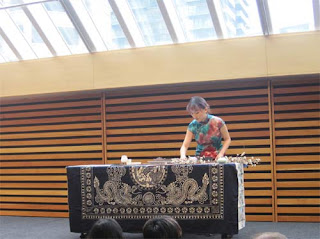 This is the fourth year that Toronto has hosted a tea festival.  It is the largest festival in Canada for tea lovers.  As tea lovers ourselves, we decided to attend.  The event took place on the 2nd floor of the Toronto Reference Library.  We enjoyed sampling many different teas from around the world.  Some were good and some were not so good.  We also learned about many of the health benefits that the different teas can provide.  One of the highlights on the main stage were the tea ceremonies.  We witnessed the Chinese tea ceremony.  There were also tea ceremonies from Japan and Korea.
The tea ceremonies are for those who take their tea very seriously.  The Chinese tea ceremony was performed by a woman with a major in Tea Science and Ceremony.  Everything had to be just right, down to how the items were displayed on the table.  She delicately cleaned the vessels and then took steps to warm them up so they would not steal any of the heat from the water when making the tea.  About 15 minutes later the finished tea was finally presented.  While we enjoy the formality of a high tea, we found that the wait for a tea ceremony would be a bit much.  After the ceremony we visited a few more of the vendors who promptly offered us their teas for sampling.