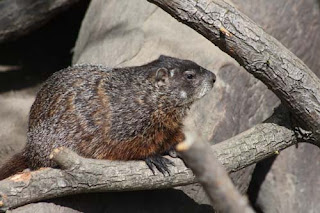 The Toronto Zoo has two types of woodchucks.  There are those that can be found in an enclosure in the Kids Zoo and those that live wild on the grounds or in the surrounding Rouge Valley.  We have encountered both types during our visits to the zoo.  Woodchucks are large rodents which are part of the marmot family and can be found throughout Canada and the eastern USA. 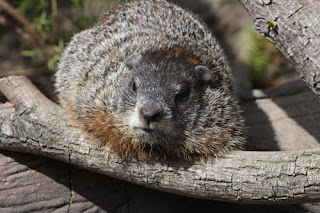 Another name for woodchucks is groundhog.  Most people may be familiar with Groundhog Day which takes place on February 2nd.  It is said that on this day if a groundhog comes out of his burrow and sees his shadow then there will be 6 more weeks of winter.  If the groundhog does not see his shadow then it will be an early spring.  Two of the most famous groundhog prognosticators are Punxsutawney Phil in the United States and Wiarton Willie in Canada. 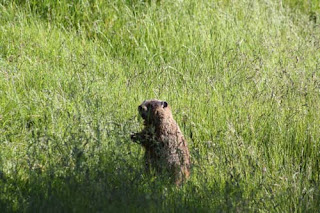 The two woodchucks pictured at the top of this post are permanent residents of the zoo.  The woodchuck pictured above is one that we encountered as we walked along the pathways of the zoo.  We could tell that we startled him because he stood up on his hind legs and looked around to ensure he was not in any danger.  Once he was confident that we meant him no harm, he went back to rummaging through the grass.  Another woodchuck we encountered seemed to enjoy a little danger.  We spotted him inside the Indian Rhino enclosure.  The Toronto Zoo displays its animals by geographic region, so we knew that an animal from India would not be on display with one from North America.  While the rhino was over by the fence, this little woodchuck decided to eat from the rhino's hay.  He had better be careful.  While the woodchuck may not have the strength to chuck any of the wood he was hiding behind, the rhino could chuck the whole pile with just one swing of its head. 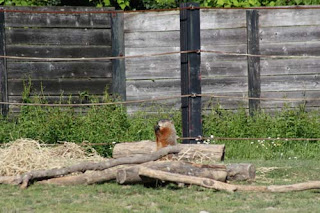