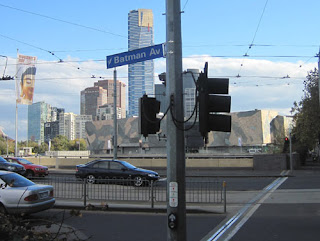 We were headed towards Federation Square when we noticed the street sign in front of us.  We were about to cross Batman Avenue.  Maybe Melbourne would also have a Spiderman Street or Iron Man Crescent?  We wondered why the street was named after a fictional superhero.  It was only much later that we would discover the street was actually named after John Batman, who was one of the founders of Melbourne, Australia.  John Batman died in May 1839 and it would be almost exactly 100 years before the Batman character made his debut in Detective Comics #27.   Detective Comics is better known as DC comics.  Try as we might we could make no other connections between John Batman and the caped crusader.  We even looked through his family tree hoping to find a Bruce or an Alfred or a Wayne.  No luck.  John Batman had seven daughters and one son and married a woman named Elizabeth.  We were hoping that he had married a woman named Robin, because the name Robin Batman would have been awesome.

Batman Avenue
Post # 110
Posted by On Vacation at 12:30:00 am
Email ThisBlogThis!Share to TwitterShare to FacebookShare to Pinterest
Labels: Australia, Melbourne, Structures, Victoria (AU)