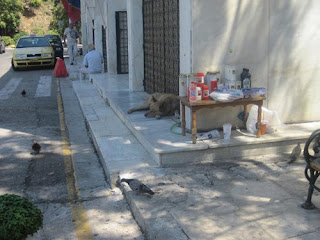 Dimitrios Mitropanos was one of the most highly regarded Greek musicians of all time.  On April 17, 2012 he passed away leaving millions of fans saddened.  At least his music will live on and bring them comfort.  Some of his most popular songs are Ta Lathathika, S'Anazito and Panta Gelastoi.  When we were in Athens we decided to pay our respects. At the front gates of the First Cemetery of Athens was a woman selling flowers, candles and other religious articles.  Her stall was surrounded by the ever present pigeons and at least one sleeping street dog.  We purchased some white roses that we planned to leave at the grave of Mitropanos.  We knew that he was buried somewhere in the cemetery, but despite trying to do some research beforehand we did not know exactly where. 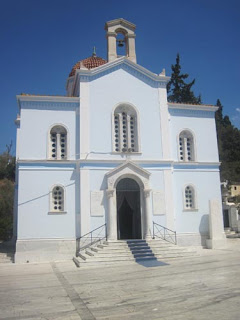 After entering through the front gates of the cemetery we came across the Church of St.Theodori.  We had seen video clips of Dimitrios Mitropanos' casket being carried through the crowds and into this church.  Now we just had to find his final resting place.  We knew that he was in an area of the cemetery along with other artists and musicians.  We walked up and down the rows of graves in hopes of spotting his name on one of them.  After some time we decided to ask for help and consulted with a guard at the western gates.  He sent us towards an area on the other side that we had not checked.  Again we walked up and down the rows with no luck.  The cicadas buzzed in the trees that sheltered us from the midday Athens sun.  We were prepared for the heat, but we feared the flowers may not reach their intended destination.  As we headed back towards the front gates, a groundskeeper approached us.  He had no doubt been observing this couple wandering from row to row with flowers in hand.  We asked if he knew where Mitropanos was buried and he said "Of course".  We followed him as he wound his way through the cemetery until we reached a section far in the back corner.  We realized that we never would have found this place without his help. 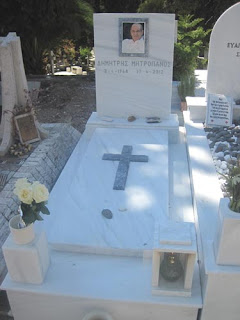 We thanked the groundskeeper and then placed our roses at the foot of Mitropanos' grave.  We stood in silence for a moment and then turned to be on our way.  We took one last look as a dove flew down and landed on the cross of the grave next to Mitropanos.  As Dimitrios sings in his song Akou, "Listen, I'm still living". 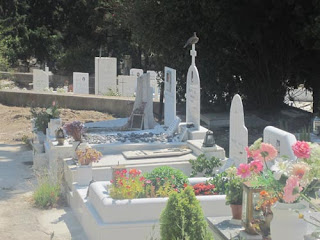