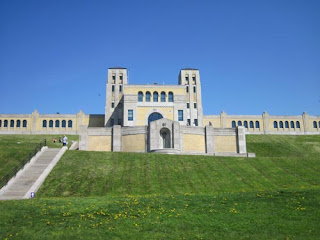 The R.C. Harris Water Treatment Plant produces about 950 million litres of water per day.  This is almost half of the water required by the city of Toronto.  Not only is this building providing an important service, but in its Art Deco style it is also one of the most interesting buildings in the city.  The plant opened in 1941 and was named after Commissioner of Works, Roland Caldwell Harris.  We visited the buildings during Doors Open 2014 and learned how the whole process works. 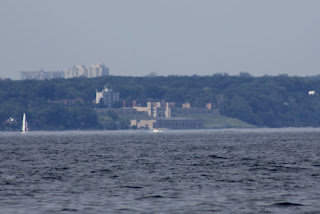 The first step for getting clean water to the citizens of Toronto is to pull the water through intake pipes that reach as far as 5 kilometres out into Lake Ontario. 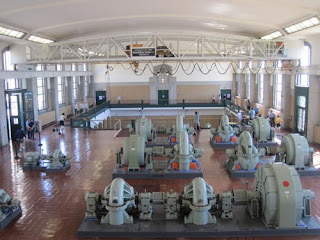 The water is pulled in by huge pumps in the Pumping Station.  When it first arrives the water goes through a screening room to remove larger objects and debris.  One need only walk along a Toronto beach to get an idea of what some of those objects may be.  At the end of the Pumping Station is what looks like an elevator.  This is not an elevator at all but an elaborate way to display which pumps are active.  There are numbers from 1 to 13 which light up when the pump is being used. Also for some reason 3 and 4 have both an A and B. 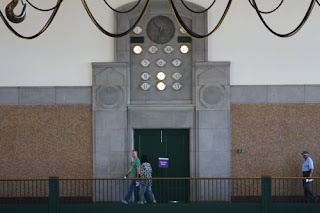 This building warned of hearing damage if spending too much time surrounded by the buzz and noise of the pumps.  The large pumps on the upper level send the treated water for distribution across the city.  The smaller pumps on the lower level send the water to be filtered.  We took a few pictures and then followed the water to the largest building which is the Filter Building. 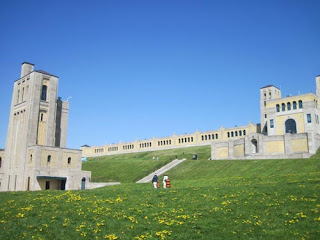 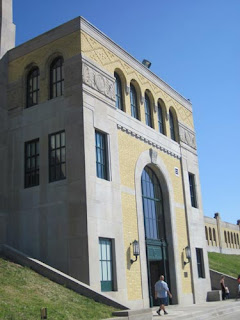 The entrance to the Filter Building is very impressive.  You enter through a huge arch and head up the staircase.  There in the rotunda you see the signal pylon.  It looks like a clock and is made of different types of marble along with chrome and bronze panels.  It does indicate time as well as filter backwash conditions. 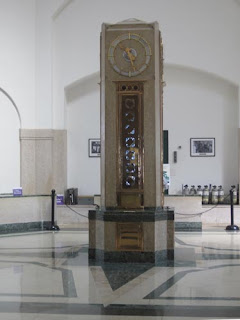 The water has chlorine added to it to kill bacteria.  It also has Alum added which causes small particles to clump together and form larger groups called "floc".  The heavy floc settles to the bottom of the tanks while the water is drawn into the filters. 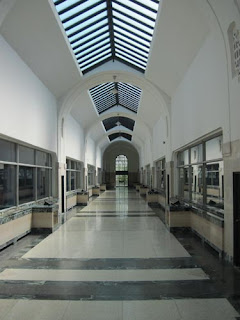 The filter rooms are located along 2 long hallways which run east and west from the rotunda.  The water filters through layers of carbon, sand, and gravel to remove impurities.  Below is a picture of one of the filter tanks. 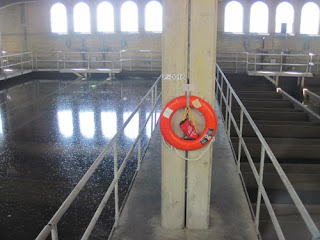 After being filtered, the water goes into storage tanks where more chlorine, fluoride, and ammonia are added before finally being pumped out of the plant and across the city of Toronto.  There are other smaller pumping stations and storage tanks, like the one below on Warden Avenue, that help get the job done. 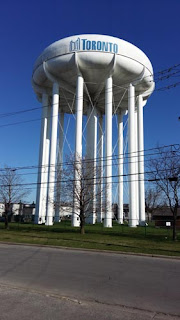 The R.C. Harris building is a beautiful piece of architecture doing a beautiful job of providing clean water to the largest city in Canada.  To really appreciate it you should try to see it from the inside, or at least view it from the Lake Ontario side.  The plant was designed so that its grand entrance faces out over the lake keeping watch across the precious water supply. 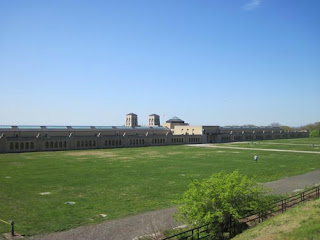 Below is a video of some swallows which make their homes along the Art Deco edges of the R.C. Harris Water Treatment Plant.