Headquarters of The Man 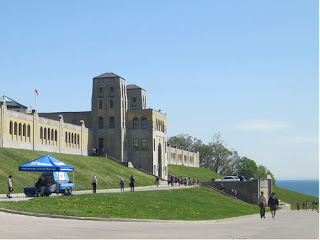 How would you like to visit a place where Doogie Howser, The Godfather of Soul, Sistah Girl, one of the Butabi brothers, Charlie Sheen's ex-wife, and Lando Calrissian all came together?  Well you had better go to the R.C. Harris Water Treatment Plant in Toronto.  Throw in comedians Eddie Griffin and Dave Chappelle and you have most of the cast from Undercover Brother.  The R.C. Harris Water Treatment Plant appears in the movie as the headquarters of The Man. It is shown as a fortress situated along the cliff edge of a tiny island. Undercover Brother (Eddie Griffin) and the members of the B.R.O.T.H.E.R.H.O.O.D. are trying to stop The Man and must infiltrate the fortress. 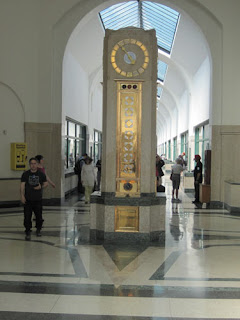 James Brown (aka The Godfather of Soul) appears as himself in the movie.  He is kidnapped and taken to the headquarters where Mr. Feather plans on administering his mind control drug.  This is the same drug they used to control General Boutwell.  Mr. Feather is played by Chris Kattan who is best known from Saturday Night Live and as Will Ferrell's brother in A Night At The Roxbury.  General Boutwell is played by Billy Dee Williams who is best known as Lando Calrissian in the Star Wars movies.  James is seated in front of the signal pylon (above) which is found in the rotunda of the water treatment plant.  Behind Mr. Feather you can see other workers in the long hallway of the Filter Building. 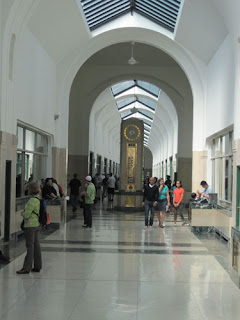 The rest of the B.R.O.T.H.E.R.H.O.O.D. which now includes Neil Patrick Harris (child star of Doogie Howser) and White She-Devil (Denise Richards), sneak into the headquarters under the guise of being the Island Fortress Cleaning Service.  They are let in by the guards located between the buildings of the Pumping Station. 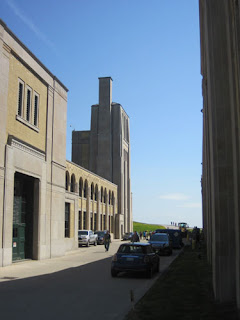 Then they pull their van up in between the pumps and all exit out the rear of the vehicle. 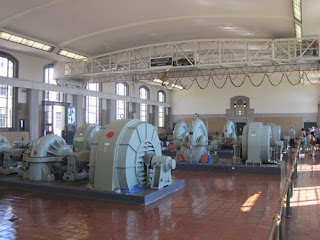 The movie ends with a final fight between Mr. Feather and Undercover Brother as they battle just outside the entrance of the Filter Building. They fight on the elevated platform that the movie uses as a helicopter landing pad.  Below you can see the area through the staircase window and again in the picture at the top of this post. 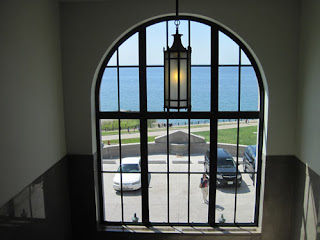 They battle it out while the Michael Jackson classic, Beat It, plays in the background. 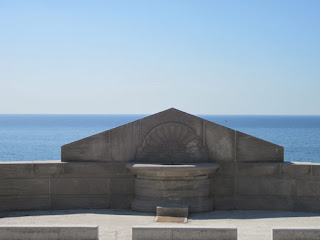 Mr. Feather ends up chopping off a chunk of Undercover Brother's afro which turns the tables.  You mess with the fro, you got to go! 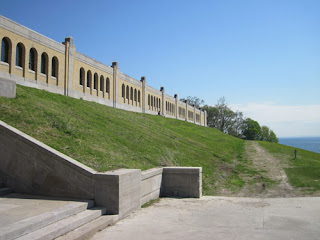 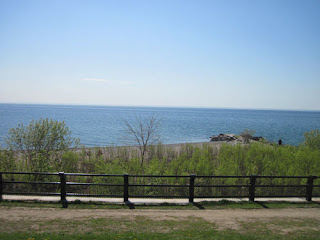 Undercover Brother was a fun movie that we enjoyed very much. We recommend you grab an orange Big Gulp from 7-Eleven and try not to spill it as you drive on down to the R.C. Harris Water Treatment Plant to check out where the movie was filmed.

You can read more about the R.C. Harris Water Treatment Plant here.

Headquarters of The Man
Post # 112
Posted by On Vacation at 12:30:00 am
Email ThisBlogThis!Share to TwitterShare to FacebookShare to Pinterest
Labels: Canada, Filming Location, Ontario, Structures, Toronto
Location: 2701 Queen St E, Scarborough, ON M1N 1A2, Canada