Lovers in a Dangerous Time

In 1991, The Barenaked Ladies recorded a wonderful cover version of Bruce Cockburn's Lovers in a Dangerous Time.  The music video shows the band in the back of a truck driving all over Scarborough and then holding a record signing.  We thought it would be fun to visit some of the locations seen in the video. 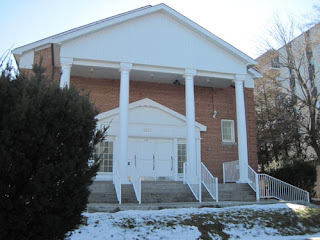 The video opens with some random shots of Scarborough.  The first of these is the Faith Baptist Church (pictured at the top of this post) on Lawrence Ave. East which is wedged in between two apartment buildings.  One interesting thing we noticed is that the church has a steeple in the video, but when we took our pictures the steeple is now missing.  We are not sure how the church came to be "de-steepled". 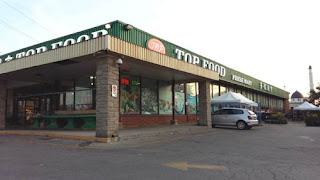 Another shot is of Club Bingo further west on Lawrence Ave. East near Brimley Road.  This bingo hall has now become a Top Food Fresh Mart. 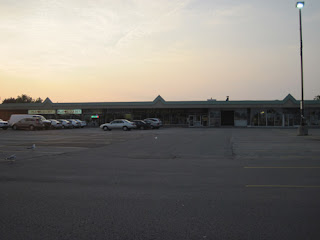 The lyrics begin with Barenaked Lady, Ed Robertson, singing on the back of a pick-up truck that is driving through the parking lot of Eastown Centre.  Eastown Centre is not a typo of East Town Centre but is really the plaza's name.  The truck drives along headed towards the dollar store (below) which used to be a Woolworths. 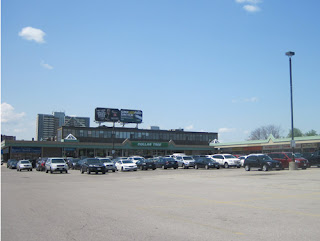 Next the Ladies are on the opposite side of Lawrence Ave in Knob Hill Plaza and headed east again.  You can see the Opticians and a teak furniture store behind them in the video.  The Opticians was still there, but the furniture store and old signage is slowly being consumed by various small businesses.  You can only see the LLERY left of what we believe once read TEAK GALLERY. 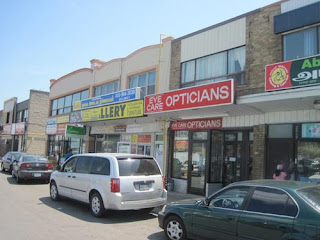 The Barenaked Ladies drive along several Scarborough residential streets and even drive through a street hockey game. "Car!"  There are also some scenes where two girls are running  from their apartment and through a hydro field.  Scarborough has a large hydro field corridor that cuts diagonally through the entire district.  We are not sure exactly where the girls run into the street as the Barenaked Ladies pick-up drives past.  We took our photo below where Brimorton Road crosses the hydro corridor.  This is right across from Churchill Heights Public School where Ed Robertson and Steven Page attended school. 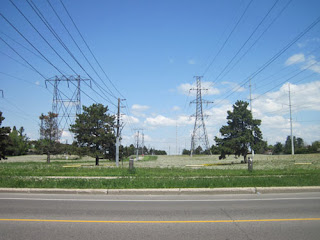 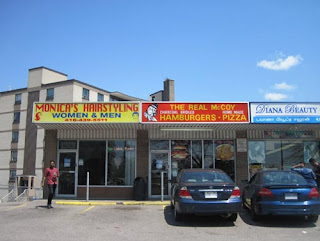 If you follow Brimorton Drive westward you will get to the corner where it intersects with Markham Road.  Here you will find The Real McCoy restaurant which has been in business at this location for almost 50 years.  The Barenaked Ladies drove their pickup through this plaza and we can only assume that they also enjoyed a few burgers here as well.  The Ladies are also seen playing their instruments near the very eastern end of Lawrence Ave. East where it becomes Rouge Beach.  They are on a hill near Ridgewood Road and the camera turns to show the train tracks running along the edge of Lake Ontario. 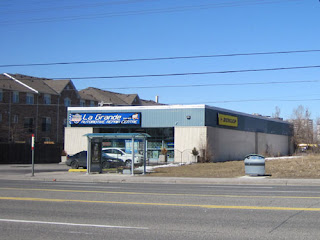 The video ends with the Barenaked Ladies holding a record signing at an A&A record store.  This store was located in a field between Trudelle Street and Eglinton Ave. East.  It used to sit all alone in the middle of that field.  It is now an automotive repair centre and has residential houses built beside it.  The last time we visited, the field was being torn up to make way for a French school. 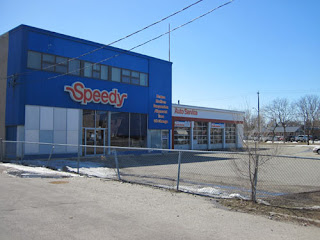 The crowds rush into the record store and across the road behind them you can see the blue Speedy Muffler shop which still stands today. 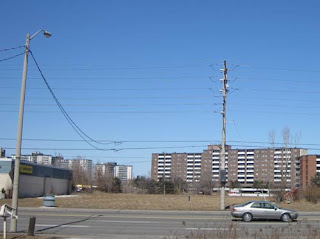 The crowds rush in and head to the Rap Dance section of the store.  Only the two girls who had been running throughout the video stop to ask the Ladies for autographs.  The video ends with an impromptu performance in the field next to the store.  The Barenaked Ladies had their first hit with Lovers in a Dangerous Time and they would go on to greater success.  This video is a nice little time capsule and homage to their Scarborough beginnings.