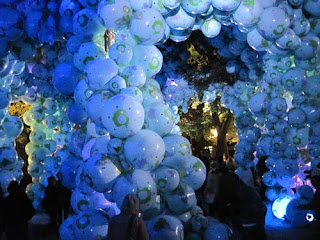 Nuit Blanche is an annual art festival where for one evening, art installations take over the city.  It takes place in cities around the world and we have attended the Toronto event several times.  This blog post is about the exhibits we visited in the wee hours of the morning on Spadina Avenue in 2014. 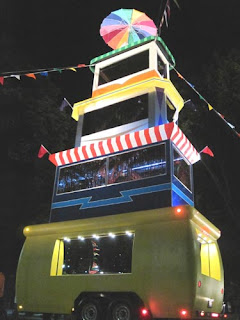 In the centre of Clarence Square Park stood a stack of colourful concession stands.  As the name of the exhibit implies, these are the type of stands you might find selling cotton candy or hot dogs at a fair or circus.  The stands rose up into the sky.  Each booth was just a little bit smaller and atop everything stood a rainbow umbrella.  Sadly, no one seemed to be inside any of the booths selling midnight snacks to hungry art patrons. 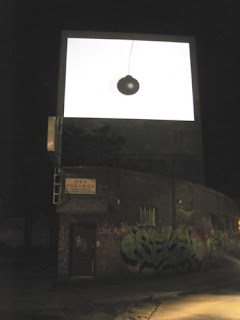 Black Sun is a video projection of a giant wrecking ball swinging against a white surface.  The ball hits the surface and bounces away.  It is then pulled back and swings towards the wall once again. This exhibit could represent the fact that so many older buildings in the city are being lost to new condo towers.  At last check, the building used for the projection was still standing. 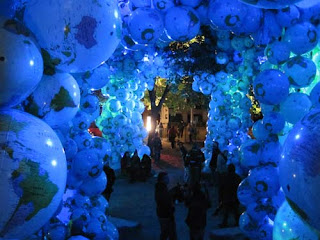 On a side street off of Spadina Ave. was a rather large exhibit.  Walk Among Worlds included 7,000 beach balls painted to resemble globes.  Each of these globes represented one million people.  Our calculation puts the total at seven billion.  The attendance at Nuit Blanche in Toronto that year was estimated at one million people.  That only makes up one of those balls that were strung together to form a canopy over our heads and that filled the pathway around us. 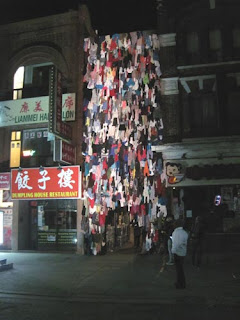 This exhibit filled an alleyway with donated clothing labeled "Made in China".  If you have ever walked along Spadina the night before garbage day you would see bags piled high in the street. This exhibit created the illusion that today was laundry day and the neighbourhood collectively hung out their clothing to dry. 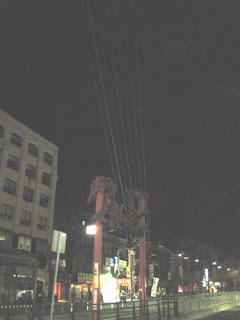 Coloured laser beams shoot from Chinatown on Spadina Ave and stretch across the sky until finally hitting the famous Toronto landmark, the CN Tower.  The beams appear like a rainbow of the night. 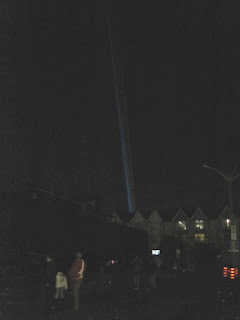