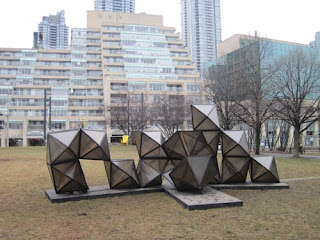 Icebreakers is a new art exhibit along the Toronto waterfront that hopes to draw people out into the cold.  We decided to check it out. The first exhibit we encountered was Winter Diamonds.  It looked like someone had been playing with a very large Rubik's Twist and then left it on the grass beside the Toronto Music Garden.  This exhibit lights up at night so you should visit in the evening to get the full experience. 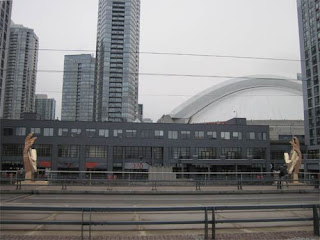 The next exhibit we encountered featured two giant, golden hands sitting on either side of Maple Leaf Quay. This exhibit was called Tailored Twins and the two hands seemed stuck in the moment before they would be forced together for a clap. 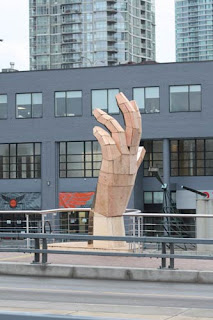 Our favourite exhibit was one called ICEBOX.  This was a large box sitting next to Lake Ontario. 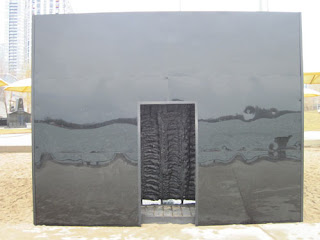 The exterior of the box reflected the view of the lake behind us.  The doorway was a convenient spot for the photographers to remain hidden from view. 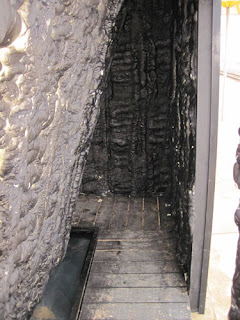 Inside the box were insulated walls and once you worked your way along you suddenly arrived in the open center. 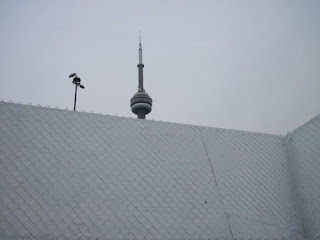 As we looked out we could see the CN Tower peering down at us.  On such a cold day this exhibit brought us a little insulation from the weather. 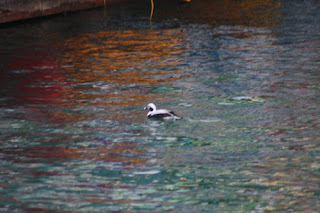 We crossed the Rees Wave Deck and received a splash of colour.  A long-tailed duck was swimming in the reflections of stacked canoes stored away for winter. 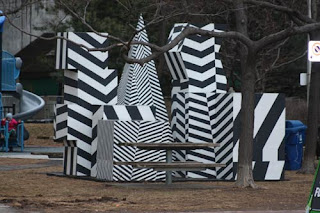 The next exhibit was called Incognito and relied on a lack of colour.  It was designed to blend into the snowy landscape.  Unfortunately there was no snow which meant that the zebra striped blocks stood out against the brown grass beneath them. 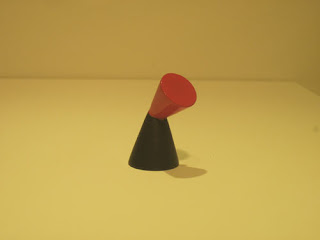 We stepped into Harbourfront Centre to warm up for a little while.  A tiny little piece of art caught our eye even though we are unsure what it is. 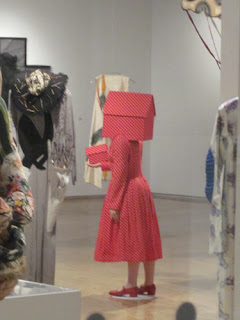 Another exhibit was featured in the gallery and our favourite was this lady in red who had a bird house on her head and was holding a smaller one in her right hand. 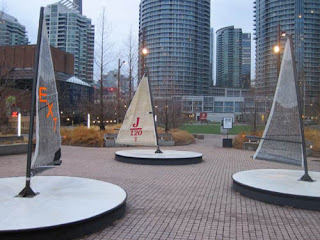 Once again we ventured outside to see the last of the Icebreakers exhibits.  This one was called Leeward Fleet and featured some windsurfing sails.  It gives you a chance to get some surfing photos while wearing your winter coat.  The sails do not turn though so you only get three different angles. Icebreakers continues until February 26, 2017 for those who don't mind that it is always colder down by the lake.