Someone Call A Veterinarian 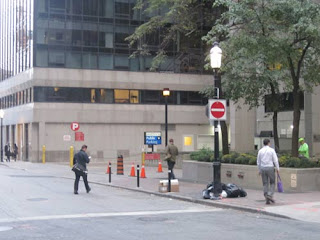 We had decided to watch the entire television series of Due South.  Due South was a show about a Canadian Mountie (Paul Gross) who ends up in Chicago helping their police department.   The show took place in Chicago, but was actually filmed in Toronto, Canada.  The fourth episode of season one is called "They Eat Horses, Don't They?" and features Richard Moll (Bull from Night Court).   In this episode a family gets food poisoning and Benton (The Mountie) suspects that it was caused by wild horses being captured illegally and sold as meat. 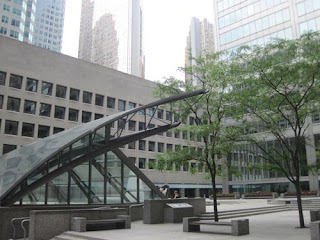 Benton takes an early morning horse ride through the streets with a woman that is also fighting to protect the horses.  When they start to ride their horses we recognized the curved glass roof that juts out from Commerce Court.  This would put them heading east on Colbourne Avenue. 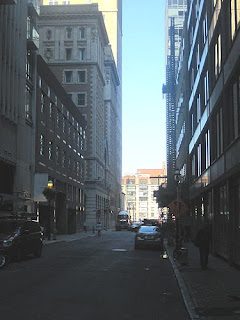 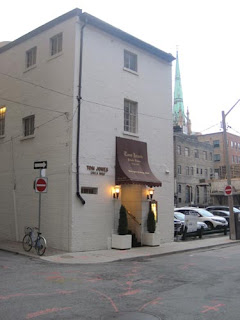 As they continue to ride along, the woman charges ahead on her horse and heads past the Tom Jones Steak House.  When she turns to look back at Benton we realized that a famous movie scene had also been filmed here heading in the opposite direction.  Surprisingly, it also featured horses. 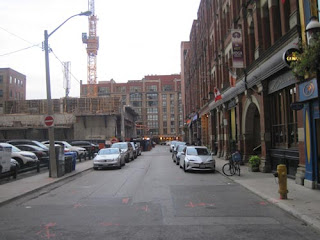 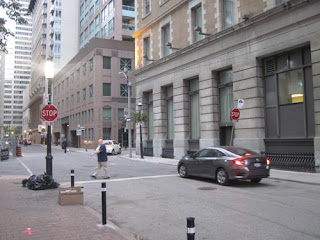 Officer Hooks (Marion Ramsey) is quietly trying to restore order after a truck full of chickens has been involved in an accident.. A vehicle pulling a horse trailer is also stuck in traffic just past the stop sign above. 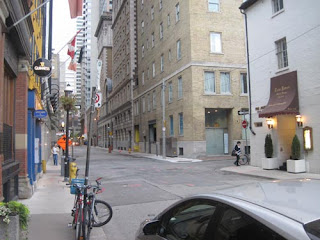 Harris is frustrated so he commandeers a motor bike and speeds off along the street heading west. 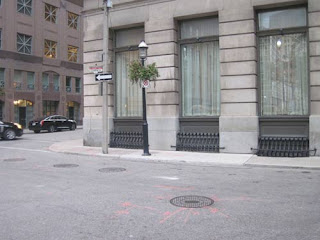 A sports car suddenly pulls out in front of Harris and he is sent flying.towards the horse trailer.  A loud whinny is heard and a woman on the street faints.  Mahoney is seen standing in front of a street light (first picture at the top of this post) and shouts "Someone call a veterinarian!".  It was fun to visit this movie/television filming location.  We had seen the King Eddie many times from the front entrance but we never had any reason to go around back.  When we did we were surprised. We suspect that Lieutenant Harris might say the same thing about horses.

This location is near King subway. Visit other Toronto TTC stations.

Someone Call A Veterinarian