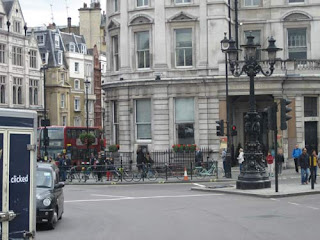 Drummonds Bank has been located across from Trafalgar Square since 1760.  It is located at the top end of Whitehall which is a street in London that contains many government buildings.  Those government buildings house many different departments and ministries.  If an episode of Monty Python's Flying Circus is to be believed, there is one ministry that many people have never heard of. 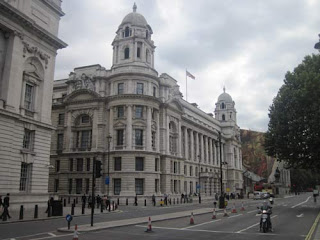 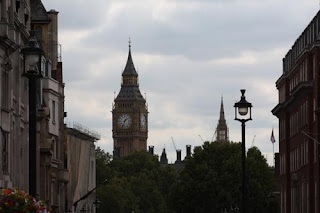 In the skit, John Cleese portrays a minister who is shown walking up Whitehall.  In the background you can clearly see the London icon Big Ben as well as the Old War Office.  The minister has a very unusual walk which is hard to describe. 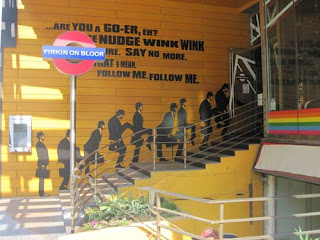 In Toronto, Canada there is a Firkin pub on Bloor Street East which has this silly walk painted on the wall beside its staircase. 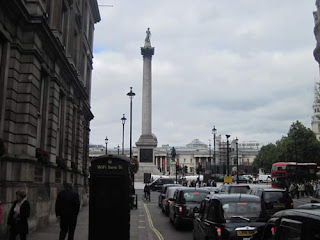 John Cleese continues walking his walk along Whitehall towards Trafalgar Square.  When he finally arrives at his destination he will have to apologize that his walk has become rather sillier recently and as a result it takes him longer to get to work. 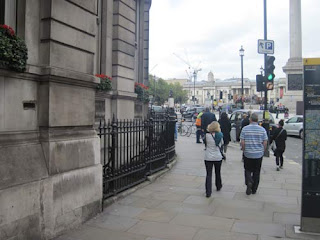 We are now only a few silly steps from the offices of a ministry that is supposed to receive the same government spending as Defence, Social Security, Health, Housing and Education.  Last year the British Government spent more money on National Defence than on the ministry in question. 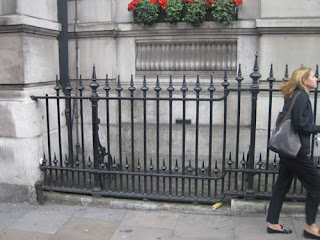 John continues on past the railing above until the camera zooms in on a sign that reveals the name of the ministry. 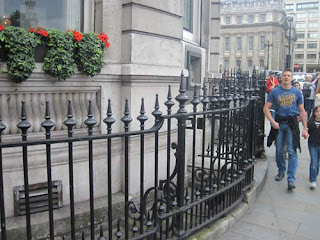 We are now almost back at the entrance to Drummonds Bank and on the fence (above) between the ATM and the window with flowers is a sign which states, "Ministry Of Silly Walks".  This skit has been an all time favourite amongst Monty Python fans.  Monty Python's appeal lies in the fact that they combine both intelligence and silliness.  We suggest that when you visit Trafalgar Square you should also take a walk along Whitehall Road to visit this filming location.  Your walk may not be as silly as a member of this legendary comedy troupe, but like Michael Palin's character we think that with Government backing you could make it very silly.