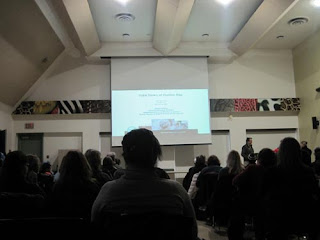 February 25th 2017 was International Polar Bear Day.  We attended the Toronto Zoo that day.  Specifically we attended a talk by the Torono Zoo's polar bear keepers and Dr. Martyn Obbard, a polar bear researcher.  Dr. Martyn Obbard talked about how the increasingly shorter season of sea ice is making life harder for the bears.  The bears rely on the sea ice to go out and hunt for seals.  Without the sea ice, the bears do not get enough to eat. Dr. Obbard worked for the Ontario Ministry of Natural Resources and his research has helped us understand what we can do to help the bears.  Conservation of polar bears requires not only several Canadian provincial and territorial governments working together, but several countries as well.  Polar Bears can be found in Canada, Greenland, Norway, USA and Russia. 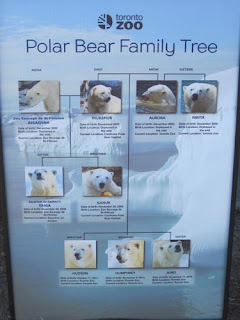 The zoo keepers also talked about their experience working with the polar bears.  The three most recent polar bear babies were all offspring of Inukshuk and Aurora.  Hudson and Humphrey just recently returned to the Toronto Zoo and Juno was leaving the week after International Polar Bear Day.  The keepers talked about enrichment and training of the bears.  One lucky person at the talk would win a chance to see a polar bear training session.  Guess who won?


We attended the training session a few weeks later.  The training sessions make it easier for the keepers to administer medication, to give the bears a checkup and to move the bears around the exhibit.  Our training session was with Nikita.  The keeper used different hand signals and a whistle to ask the bear to perform a task.  Each success was rewarded with either a handful of meat or fish.  When the keeper made an open hand motion Nikita opened her mouth.  When the keeper tapped a wooden stick against the fence, Nikita would touch it with her closest hand.  When the keeper pointed to a target, Nikita would go over and touch her nose to the target.  The children that attended the training with us were very impressed with how well Nikita performed.  Finally, one big fish and the training was completed for the day.  Good work Nikita and good work to all of the people helping polar bears in the wild.

Click here to take a virtual tour and see our (almost complete) collection of Toronto Zoo animal photos.
Map of Our World