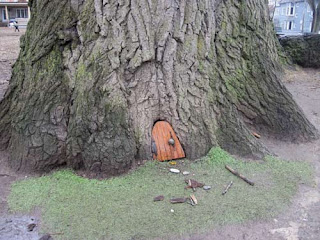 Kew Gardens in Toronto is named after the famous botanical gardens in London, England.  It is much smaller and is a portion of Beaches Park which runs from Queen Street East down to the beach in front of Lake Ontario.   Before we entered the park we enjoyed a nice brunch at the Green Eggplant.  The highlight was their Sky High French Toast which is made with challah bread. 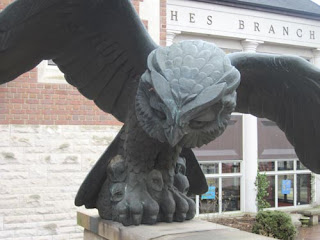 After brunch we crossed the street to the Beaches Library.  Out front stood a statue of a mother owl with her owlets gathered around her feet.  We took the pathway next to the library and headed into the park.  We walked deeper into the park and then as we passed the baseball diamond we noticed a little tiny door at the base of a tree. 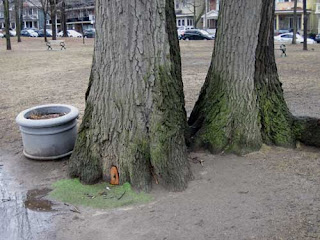 Facing the third base side of the diamond was a little tiny home like you might see in a fairytale.  We wondered who would live there? 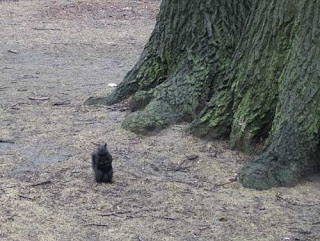 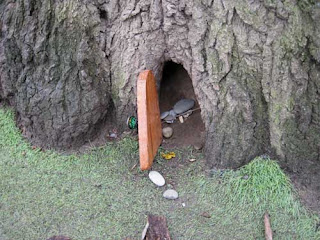 We knocked at the door and there was no response.  We decided to gently swing the door open.  We half expected an angry squirrel or chipmunk to lunge at us so we were pleasantly surprised to find that no one was home.  Inside the door were various rocks and twigs that had been placed there perhaps as gifts from other curious visitors like ourselves.  We closed the door behind us and left everything undisturbed.
Upon further investigation we discovered a Toronto Star article that stated that this door was placed there by the author of a series of children's books.  In the books it was the home of Henley the Hedgehog.  Henley is a real pet hedgehog and does not actually live inside the tree.  Who does actually live there now?  When you visit the park maybe you can solve this mystery.