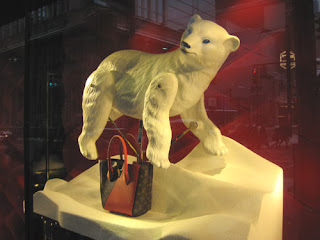 Saks Fifth Avenue has taken over part of the Hudson's Bay store on Queen Street in Toronto.  This is because Hudson's Bay now owns Saks.  It also means that besides the popular Christmas windows at The Bay, we get more decorated windows along Yonge Street.  We visited the Saks windows in 2016. Welcome to the Land of 1000 Delights. 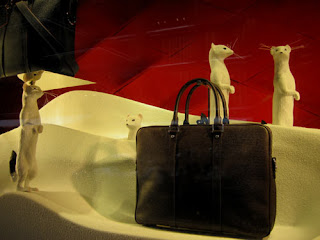 The first windows we encountered were not yet part of the Land of 1000 Delights.  The first window featured a polar bear who was running like the mechanism of a clock. The second contained a group of ermine.  An ermine is a stoat in its winter coat.  A stoat is a type of weasel.   The animals looked as if they had been hired to guard the purses in the displays.  It is not uncommon for there to be a $4000 price tag on a purse at Saks so the store could be testing out new security measures. 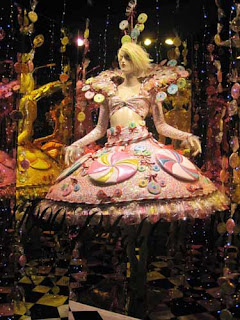 The first lady we encountered was Lady Lollipop.  She was covered from head to toe in swirly lollipops.  Many children sport a similar look when eating lollipops.  A few licks of the lollipop and ...ooops!  Next thing you know you have a lollipop stuck to the edge of your Christmas dress. Up next was Baroness Lebkuchen.  Lebkuchen is a German baked good similar to gingerbread.  We have never knowingly tried lebkuchen, but now we will have to get our hands on some.  We were only at window number two and already getting hungry. 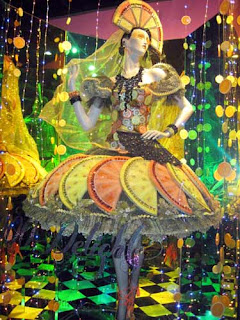 Countess De Limon was the next lady arriving with zest.  She had slices of lemons, oranges and limes.  We suspect it was candied fruit all covered in sugary syrup. 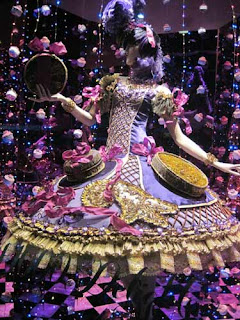 A deep purple display contained the Duchess De Chocolate.  This was definitely our style.  We imagined we were unwrapping some gold and purple foil covered, dark chocolates. 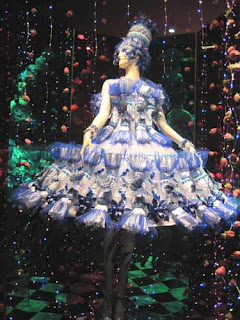 The Queen of The Christmas Crackers was ready to start things off with a bang.  We imagine her dress was entirely filled with bad jokes, paper crowns and if you were lucky, a fortune teller fish.  When she finally pulls her dress off expect to smell something burning and find little bits of paper and prizes everywhere.  Check the cranberry sauce just in case. 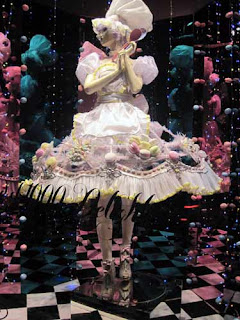 Mademoiselle Macaron was making a sweet entrance.  She had some of the tasty meringue and almond based treats along the edge of her dress.  Those macarons wouldn't last long if there wasn't a glass window between us.  Excusez-moi! 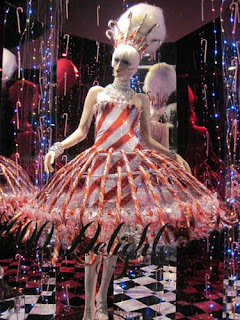 Little Princess Peppermint was twirling and swirling in her window.  She had a dress made of traditional  red and white candy canes. 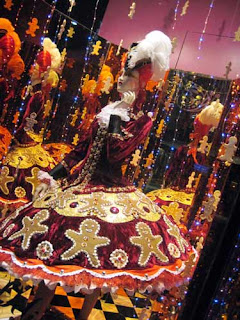 The highest royal titles are those of Emperor and Empress.  This next window contains Empress Gingerbread.  She ranks much higher than the Baroness, Duchess and even the Princess and Queen in the other windows.  We do enjoy gingerbread during the holidays, but as we mentioned before we have yet to try lebkuchen. 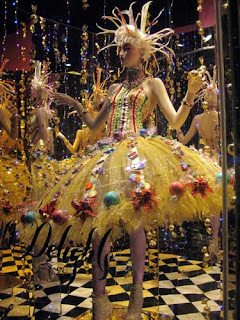 The final window featured the Marchioness of Confections cutting a candy rug.  A Marchioness is the equivalent of a Marquess.  She ranks lower than a Duchess, but higher than a Countess.  She was covered in all sorts of sweet treats.  We enjoyed our walk through the Land of 1000 Delights.  Now get out of our way as we are headed to the lower level of The Bay where they have their candy department.