Between The Avalon & The Colony 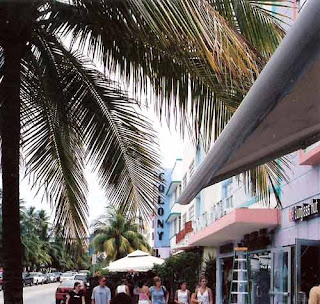 When we were in Miami we took a walk along Ocean Drive which is the main street of South Beach.  Little did we know that we were walking through two on-screen crime scenes.  One was filmed over twenty years before we arrived and the other would not happen until two years later.  We had taken a few pictures which managed to capture some of the action that took place between 7th and 8th streets along Ocean Drive. 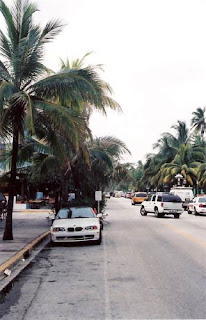 In the movie Scarface, Tony ( Al Pacino) and Manny (Steven Bauer), along with Angel and Chi Chi are headed to make a drug deal of their own.  They turn onto Ocean Drive up at 13th street near The Carlyle Hotel.  They head down the strip past 8th Street (pictured above) and then drive past the Colony Hotel (pictured at the top of this post).  They finally pull a u-turn in front of the Beacon Hotel and park the car across the street between the Beacon Hotel and the Sun Ray Motel.  We are guessing they parked approximately where the white car is parked below.  Tony and Angel head up some stairs to a top floor apartment of the Sun Ray Motel while Manny and Chi Chi wait in the car. 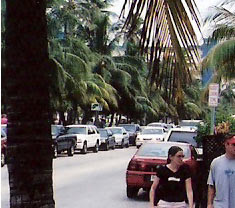 Basically, things do not go well.  Angel gets killed by a chainsaw, Manny and Chi Chi rush inside, a gunfight ensues, Manny gets injured and several people are killed. It all ends with Tony shooting a Columbian drug dealer in the head outside on the street, to the horror of the Beacon Hotel patrons.  Tony then pulls another u-turn in the car and Manny and Chi Chi pile into the back seat.  They then race off heading south down Ocean Drive.  We also headed south past the Colony, the Sun Ray, the Beacon and finally the Avalon before we reached 7th Street.
This brings us to the next crime scene from the television show Dexter.  When we visited Miami, Dexter star Michael C. Hall was still Six Feet Under.  Dexter is a forensic analyst and his sister Deborah is a Miami police officer.  Oh... and Dexter is also a serial killer.  In episode two they have been tracking a killer dubbed "The Ice Truck Killer".  Deborah phones Dexter and they both arrive on the scene at the south end of the Avalon Hotel. 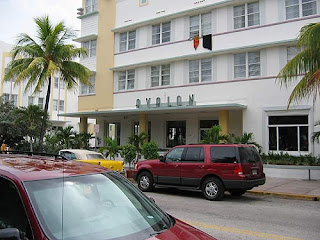 There is an ice truck parked on the street.  Inside they find severed fingertips frozen in a block of ice.  The entire scene unfolds with both the Beacon and Colony hotels clearly visible across the street.  It turns out that the ice truck is parked in almost the exact same spot that Tony Montana's car was parked in Scarface.  We think this was done as an intentional nod to the classic film location.  Say hello to my little coincidence!