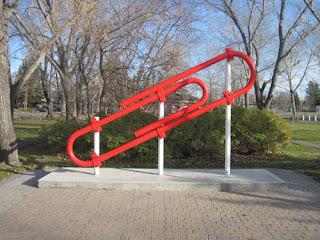 The small town of Kipling, Saskatchewan has the world's largest paper clip on display.  The paper clip is over 15 feet tall and and weighs 3043 lbs.  The paper clip represents a series of internet trades that also made it into the Guinness Book of World Records.  When we drove from Regina, Saskatchewan to Winnipeg, Manitoba we specifically detoured in order to check it out.
It all started in 2005 when Kyle Macdonald traded a red paper clip online for a fish shaped pen.  He then traded the pen for a door knob and so on and so on.  Eventually, he ended up trading a KISS snow globe with actor Corbin Bernsen.  KISS is a band best known for their painted faces, stage pyrotechnics and Gene Simmons' tongue.  Corbin Bernsen is best known for appearing in the Major League movies or as Arnie Becker on the television show L.A. Law. As a result of all this trading Corbin now has a star in front of the giant paper clip. 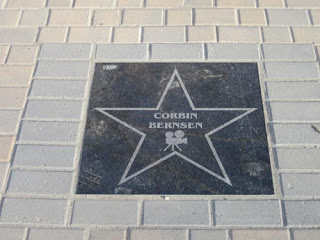 The snow globe was traded for a movie role.  This is where the town of Kipling finally became involved.  The movie role was offered online and the town of Kipling traded the house at 503 Main Street.  One of the residents of Kipling acted in Corbin Bernsen's movie Donna On Demand.  The trading was complete and the big red paperclip was erected in Bell Park.  It now joins a long line of world's biggest items that draw tourists like ourselves to small towns like Kipling.  Not many of them can boast such a story as this one red paper clip. 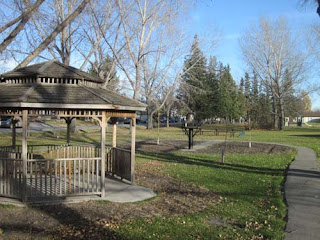 One question we have is if a paper clip is defined by its shape or its function?  While this giant red steel bar has been bent into the traditional paper clip shape one wonders if it would be capable of actually holding paper.  Aside from the fact it would need giant sized pieces of paper, we wonder who or what would give it that slight bend needed in order to slide some paper into place? 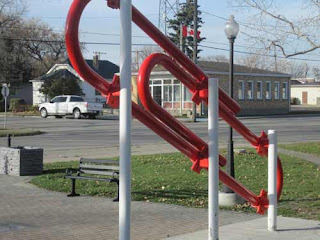