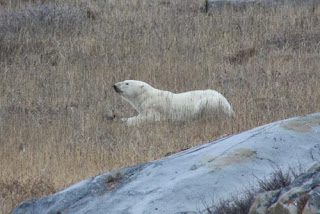 We were ready for the second day of our Tundra Buggy Tour.  You can read about Day One here.  Our group decided that the best course of action was to head towards where we had observed a bear digging yesterday.  Normally, we tried to travel along something that resembled a road. 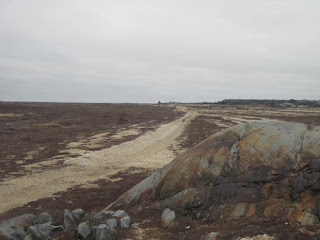 Sometimes we had no choice but to take things off-road.  Part of the route we took seemed more like we were traveling along a stream than across the tundra. The buggy crept through the water towards our destination.


Another Tundra Buggy was rolling along ahead of us when it suddenly stopped.  Over beside some bushes was a polar bear sleeping right out in the open.  He sort of woke up when our buggy stopped as well.  It was only to take a big yawn.


It turns out that the buggy in front of us had stopped for more than just polar bear watching.  The day before we had been wondering what would happen if a buggy broke down or got stuck in the mud and rocks.  Turns out the answer would unfold right in front of us.  Luckily the broken buggy was on a stretch of road.  A pickup truck came by and pulled up next to the broken buggy.  One of our guides exited our buggy, took his rifle from its case and bravely strode down the road to stand guard while the repairs were completed. 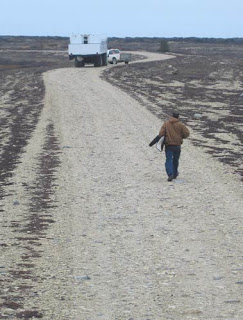 Fortunately the bear was still as disinterested as ever. The repairs were completed and our guide returned to the safety of his tundra buggy.  The other buggy began to continue on its way.  This seemed to finally arouse the bear who decided it was time to take a walk across the tundra.  He walked around as we wondered if he would decide to come and check us out.  Once again we were rejected by the bear.


We headed further along and reached the spot where a bear had been digging yesterday.  We looked along the water's edge and he was nowhere to be seen.  Perhaps he had moved on.  We went a little higher up onto a rocky plateau and then all of a sudden there he was.  He was busy chewing away on something in the grass.  It seems his digging the day before has netted him a bit of a feast.  One of our guides suggested it was most likely part of a whale, perhaps a beluga.  The bear chewed his dinner for some time and then suddenly turned his back on us.  We got the hint and our Tundra Buggy decided it was time to move on. 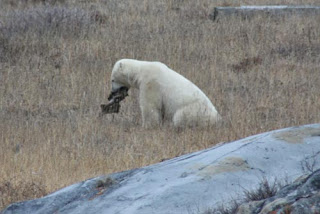 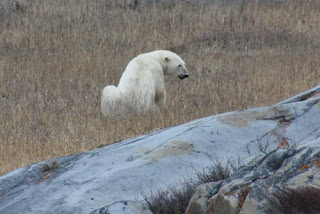 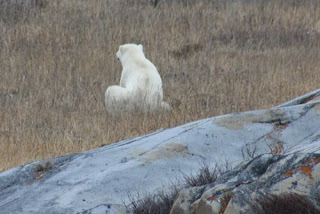 We had another great day out amongst the bears.  As we headed back we passed the buggy that had problems earlier. 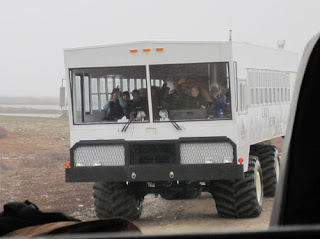 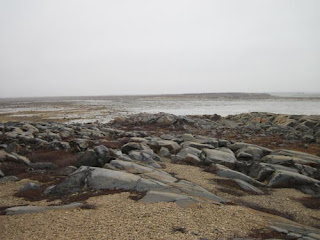 You can read about Day One here.