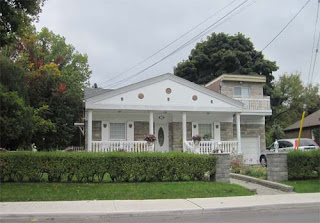 The sequel to My Big Fat Greek Wedding will be released in theatres today.  The original movie was filmed mostly in Toronto and went on to become the highest grossing romantic comedy of all time.  The movie was written by Nia Vardalos about her own life.  She plays Toula who is a Greek woman that falls in love with a non-Greek man (John Corbett).  The story follows the two families as they come together for the inevitable big fat wedding.
The home above was used as the exterior of  the Portokalos house where Toula lives with her family.  You can tell that even in real life this home belongs to a Greek family.  The statues in the yard and the decorations on the front make this clear.  There were still a few modifications that were made for filming such as adding a false second floor and placing additional statues and lighting in the front yard.  A false garage painted like a Greek flag was added on one side while the actual garage pretended to be a big bay window.
The home makes multiple appearances throughout the movie and dressed up in all it's proud Greekness it really is hard to miss.  Based on the trailer we watched for My Big Fat Greek Wedding 2, it looks like the entire cast is back for the sequel.  That includes the house.