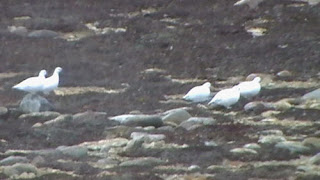 Most people come to Churchill, Manitoba to see the bears.  There are also lots of interesting birds out there on the tundra.  Two that we encountered were the willow ptarmigan and the snow bunting.  We would have loved to see a snowy owl, but there is always next time.  We suspect that the owls saw us even if we didn't see them.


Willow ptarmigans can usually be found walking along the ground out on the tundra.  They build their nests on the ground as well.  We spotted groups of them as we surveyed the terrain looking for polar bears.  The birds had already changed into their winter plumage which made them easier to spot against the brown, rocky tundra.  Normally the birds are also brown which helps camouflage them throughout the summer months.  Soon enough the snow will come and the birds will blend back into their surroundings once more.  Willow ptarmigans are members of the grouse family and we would put their size at somewhere between an overgrown pigeon and a small turkey.


Another bird we spotted out on the tundra is the snow bunting.  Buntings are a small songbird and love the northern climate.  They can be found anywhere up in the arctic. We spotted a bunting on the rocks (below) sitting not far from where a polar bear was digging through seaweed.  This was the only one that sat still for any length of time. 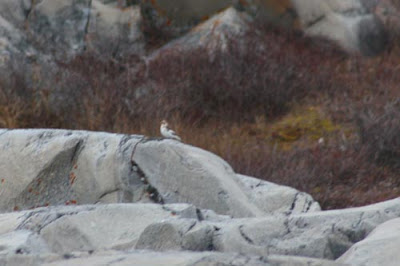 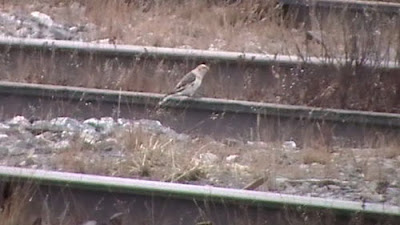 The photograph of the bunting on the train tracks was a lucky shot as the bird only remained still for a second.  It was taken behind the Churchill train station where there were a few snow buntings flying from rail to rail.  They all had their brownish winter plumage which both sexes have this time of year.  During mating season the males will turn all white with only some black remaining on their wings. 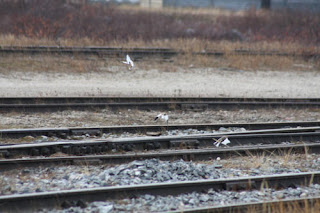 We enjoyed the ptarmigans from the safety of our Tundra Buggy and the snow buntings from the relative safety of the train station platform.  As always while in Churchill you have to be on the lookout for bears.  We recommend that you bird watch with a buddy.  You never know who might be watching you.