The Quebec City to Levis Ferry 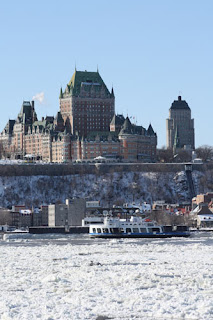 We didn't need to get to Levis, in fact we didn't even get off on the other side.  We rode the ferry that goes across the St. Lawrence River for sheer pleasure.  We had been staying at the Chateau Frontenac in Quebec City and from the hotel we could see the ferries pushing through the ice that had formed on the river's surface.  We just had to get a closer look. 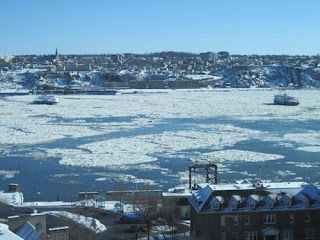 So despite the bitter wind and cold we took the funicular (incline railway) down to where the ferry departs.  We rode the ferry from Quebec City to Levis and back again.  The trip only takes about 20 minutes each way.  At these low temperatures you could get frostbite much faster. 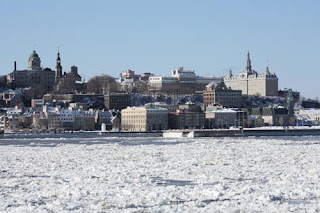 From the middle of the river you get great photo opportunities of Old Quebec along with Chateau Frontenac (top of this page) and the famous Citadel.  That is if you were willing to leave the warmth of the  ship's interior and head out onto the deck 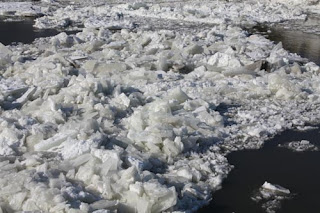 Broken chunks of ice jutted up from the river's surface.  These had been broken up by our ferry or other boats from further up river.  We watched as the ice moved from our path or sometimes huge cracks formed as our boat fought its way through. 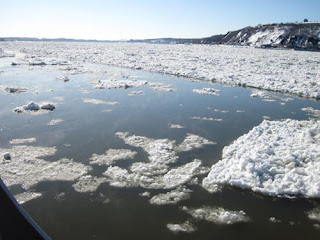 In some spots the ice was moving rapidly because the current was so strong.  The ferry had to adjust for the current so it would force its way against the current and then ride with it in order to arrive at the station on the other side.  The St. Lawrence River runs from the Atlantic Ocean, through the provinces of Quebec and Ontario until it finally ends its 3,000 kilometre journey at the first of the Great Lakes, Lake Ontario. 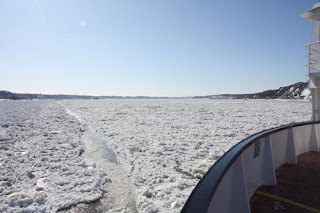 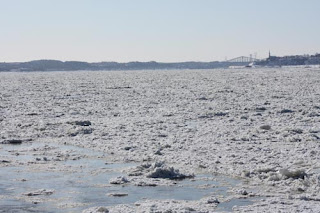 It wasn't long until the ferry scraped up against the icy wall on the Levis side of the river.  While the ferry off-loaded and re-loaded we took the opportunity to warm up back inside again.  Our cameras also appreciated the break.  Just be aware that changes in temperature can lead to a foggy lens so be sure to give your camera some time to adjust. 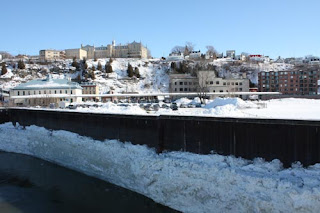 We had started off on the upper deck but now we wanted to get even closer to the action.  The lower level of the ferry is where vehicles are secured while they make the journey across the river.  This also just happened to be the best spot to get right up close to the cracking ice and the metallic creak of the ferry as it forced its way along.  Oh what a noise!  In the video below you can hear for yourself.  Mostly what you will hear is the wind blowing into the tiny microphone on our camcorder, but beneath that is the crunch of ice.


As the boat scraped against land once more on the Quebec City side we were glad to be back from our adventure.  We headed up to the warmth of our hotel where we were happy to report that everyone, camera equipment included, had survived the trip.