The Mask at Warner Bros. Studios 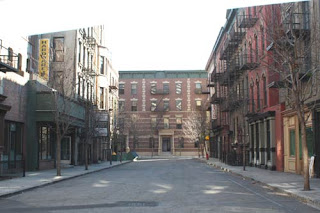 We have a copy of The Mask on DVD that we got for free inside a box of cereal.  The movie was also a box office success and starred Jim Carrey as Stanley Ipkiss.  When Stanley finds a special mask he puts it on and is transformed into... well, into Jim Carrey doing his stand-up routine. 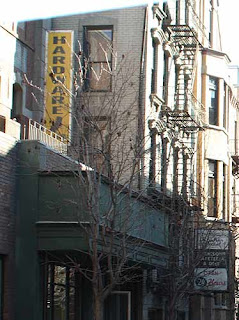 When we visited Warner Bros. Studios, we were lucky to see some of the filming locations from this movie.  The first location is found on Hennessy Street of the backlot.  Stanley lives in the apartment pictured above.  It is the building with Hardware written on it and fire-escapes on the front.  When Stanley first puts on the mask he becomes a green faced cartoon-like character.  He ends up bouncing down a hallway and out the window of this building.  He is flattened when he hits the ground below.  A car honks at him for being in the street.  Stanley pulls out a tiny little horn which lets out one giant-sized windshield shattering " Bahooogahh!" 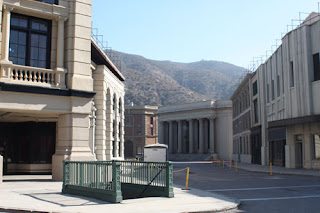 Later in the film Stanley is once again wearing the mask.  This time he finds himself face to face with a street filled with police.  The building above played the neon lit Warwick Hotel. 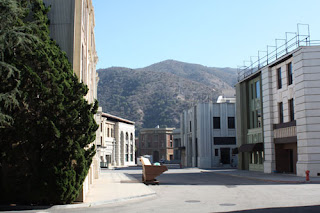 When faced with this predicament, The Mask breaks into song and the police are surprised to find themselves losing control and dancing along.  The song he sings is Cuban Pete.  This song was previously made famous by Desi Arnaz of I Love Lucy fame.  All of the action takes place just beyond the dumpster you see in the middle of the road above. 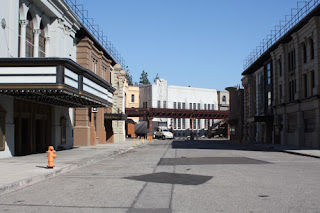 At one point The Mask leaps into the air and slides down a light pole beside this theatre (right hand side of the photo above).  The dance sequence continues and finishes with a conga line before The Mask sneaks off once again.  Our golf cart also snuck off once again as we continued our tour of the studio.