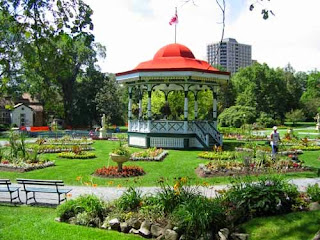 It was the perfect summer's day to relax in the park.  Our plan was to do nothing but walk around downtown Halifax.  We walked through the wrought iron gates of the Public Gardens and it wasn't long before we realized what a beautiful place it was.  We walked over a small bridge and stopped to admire the view.  A small stream flowed under the bridge past trees, flowers and miniature buildings.  The stream was also home to many of the park's resident ducks. 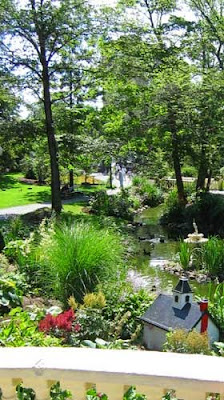 Three ducks managed to steal the show.  Below they are devising a plan to get our attention. 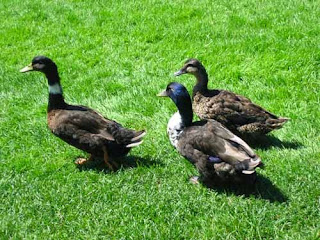 And then they put the plan into action as a duck parade began and marched right across the pathway in front of us.  Well done! Attention received!  We followed the parade deeper into the gardens.


Before we go further, one more word about these ducks.  We have determined that these were mallard ducks.  We also noticed that the heads of the two males were blue and not the traditional green.  It seems that there is much debate over this on the internet, much like how one person might see a dress as gold while another sees it as blue.  Some people claim that the blue is just a trick of the light reflecting a certain way.  Others have stated that the bright green is caused by the high testosterone levels in the ducks and that these blue headed ducks must therefore have lower testosterone levels.  A third option is that we have completely misidentified them and these are not mallard ducks at all.  All we know is that they put on one heck of a parade and it wasn't long before the ducks lead us to another pond. 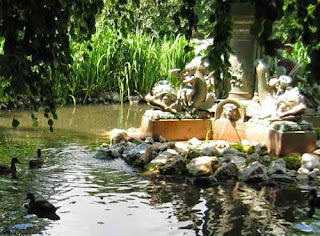 In the center of the pond is the Boer War Fountain.  It was erected in 1903 and has a soldier standing at the top of it to commemorate the Canadian soldiers who served in the South African War.  At the base of the fountain is a pond filled with ducks.  We also noticed many other birds in the gardens.  There was a Toulouse Goose being watched over by a pigeon and an American Pekin Duck waiting by the pathway hoping to take part in the next parade.  After following the birds around, we finally took a seat on a bench near the bandstand and relaxed for the rest of the afternoon. 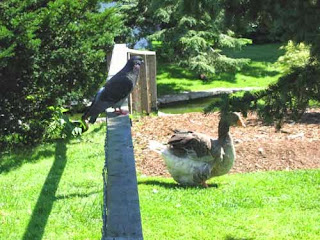 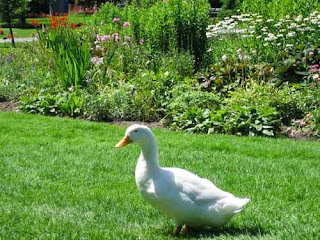