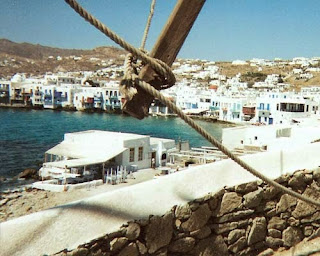 During our visit to the Greek island of Mykonos we stopped by their famous windmills.  These windmills were originally created to use wind power to grind wheat.  Today they stand as one of the most recognizable features of the island.  We recently discovered that the picture above is the only one we have that includes any part of these windmills.  You can just see one of the blades and rope from the windmill that we were standing beneath. This is back in the days before we owned a digital camera so we are still going through old shoe boxes and albums in the hopes that something may turn up.
What we did capture perfectly is the scooter rental store from the end of The Bourne Identity.  In reality it is a restaurant called Sea Satin Market.  We know that the movie was still filming in 2001, so we expect that we beat Bourne to the island by about a year.  This restaurant is where Jason Bourne (Matt Damon) is finally reunited with Marie (Franka Potente).  Franka Potente is best known for her role in the wonderful film, Run Lola Run, where the story unfolds in 3 possible outcomes.  In The Bourne Identity, Marie rents a couple of scooters out front and then turns and heads inside.  She starts to tidy up the store when Jason suddenly appears in the doorway.  As the couple embraces the camera flys out away from the building and Extreme Ways by Moby starts to play.  We finally get a glimpse of those Mykonos windmills and then the credits begin to roll.
Do you think there are more pictures somewhere in that other box ?