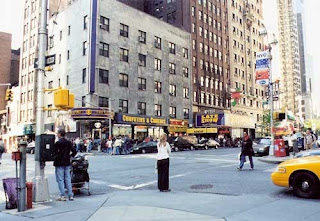 David Letterman has been a part of late night television since 1982.  Originally his show was on NBC, but years later it moved to CBS.  His NBC show was called Late Night with David Letterman and now it is called Late Show with David Letterman.  The Late Show is filmed inside the Ed Sullivan Theater on Broadway in New York City.  This is the same theatre where The Beatles performed in 1964 making their American television debut.  Like most late night shows, with the exception of Saturday Night Live, it is filmed in the afternoon.
We had already successfully called and secured tickets for the week we would be in New York.  We arrived around 3 PM and picked up the tickets.  We then had some time before we needed to return and line up again to get inside.  We took this time to check out the neighbourhood.
The south side of the theatre on W 53rd Street was starting to be closed off to traffic.  This was because one of Letterman's guests was filming a segment.  Jesse James (Monster Garage) had converted a hot dog cart into a drag racer and they were going to race it down the street.  Also on W 53rd Street is the Hello Deli.  The Hello Deli is owned by Rupert Jee and longtime fans of the show should recognize him.  Through the years he has appeared on the show many times.  Usually a camera comes into the deli and Dave talks to Rupert from the studio.  Another memorable segment was where Rupert went around the city wearing an earpiece and did and said whatever Dave told him to.  In the photo below he is the one in shorts standing just outside the deli door. 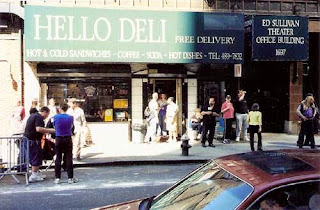 We returned to the theatre and lined up to go inside.  We ended up being about 6 rows back just in front of Paul Shaffer and the band.  Paul Shaffer has been the bandleader throughout Letterman's late night run and is Dave's official side-kick.  One fun thing about being at the taping is that we get to hear the band's entire performance while those watching at home are viewing commercials. Before the show Dave came out and chatted with the audience until it was show time.
The episode we watched consisted of Mark Wahlberg promoting his new movie The Italian Job, Jesse James racing his hot dog cart dragster down 53rd street, and a musical group called The Sounds.  Every night Dave does a Top Ten list and on this night it was the Top Ten Good Things About Having the Same Name as a Celebrity.  The show located people whose real names are the same as famous celebrities and had them come up on stage to read the list.  Number one was read by a man named David Letterman. "When people meet me, they say Wow, you look much better in person." 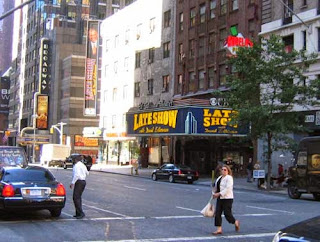 David Letterman has become the longest running late night talk show host in television history.  It will be about 33 years since his original show took to the air.  He will host the Late Show for the last time on May 20, 2015.  Thanks Dave!